Placental Damage May Cause Maternal Rejection of the Fetus, As in Organ Transplants

Application of an organ transplant rejection test offers insight into understanding preterm births and recurrent miscarriages. This recent study in the January/February issue of Pediatric and Developmental Pathology provides evidence that, like a transplant recipient’s body can reject a donor organ, chronic villitis of unknown etiology (VUE) can cause the mother’s body to reject her fetus. 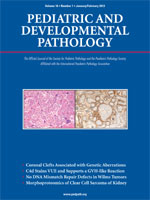 Pediatric and Developmental Pathology – A test that screens for organ rejection in transplant patients may also offer clues to a complication in the placenta that occurs during pregnancy. Preterm birth and recurrent miscarriage have been associated with the development of chronic villitis of unknown etiology (VUE). This test may provide evidence that, like a transplant recipient’s body can reject a donor organ, VUE can cause the mother’s body to reject her fetus.

The current issue of the journal Pediatric and Developmental Pathology presents a study testing whether VUE represents host-versus-graft rejection by the mother. Placenta sections were tested and patient charts were reviewed for 40 cases of VUE and 40 control cases. The cases were matched for maternal age, gestational age, birth weight, and Apgar scores at 5 minutes.

VUE is an inflammation affecting chorionic villi in the placenta. The inflammation does not have an infectious cause, and it typically occurs in the third trimester of pregnancy in about 5 to 15 percent of placentas. Perinatal death or disease does not follow in most cases; however, VUE is associated with fetal intrauterine growth restriction, preterm birth, and recurrent miscarriage in subsequent pregnancies.

The syncytiotrophoblast, a major component of the human placenta, provides a barrier between fetal antigens and maternal blood. If the barrier is damaged, the placenta no longer “masks” the fetal antigens, and maternal cells begin to attack, similar to organ transplant rejection.

C4d immunostaining is routinely used as a marker for antibody-mediated rejection in transplant biopsies. Positive C4d results were noted in this study by circumferential immunostaining of the villous syncytiotrophoblasts. There was positive staining in 35 of 40 cases in the VUE group, but in only 2 of the 40 cases in the control group.

This study supports a maternal host-versus-graft response to placental damage due to VUE. While this finding offers answers, it also raises more questions for the future, including the source of the “unknown etiology” and why it appear later in pregnancy.

About Pediatric and Developmental Pathology
Pediatric and Developmental Pathology is the premier journal dealing with the pathology of disease from conception through adolescence. It covers the spectrum of disorders developing in-utero (including embryology, placentology, and teratology), gestational and perinatal diseases, and all diseases of childhood. For more information about the journal or society, please visit: http://www.pedpath.org.