For the third year in a row, L-com has won the gold Stevie® Award for Customer Service Department of the Year at the American Business Awards. L-com also picks up seven bronze awards including two for individual sales reps and one for an individual customer service rep. 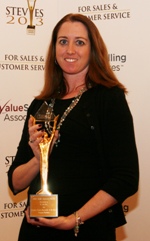 "Having won this award for the past two years doesn't diminish the honor and excitement of winning again in 2013." - Les Smock, L-com's Contact Center Manager

L-com, Inc., a designer and manufacturer of wired and wireless connectivity products, has won a gold Stevie® Award at the American Business Awards' (ABA) Stevie® Awards for Sales & Customer Service. This is the third year in a row that L-com has won a gold at this awards show, and all three gold awards were in the category of Customer Service Department of the Year for Computer Hardware.

L-com announced in January that it was selected as a finalist in eight categories at the ABA award show, acknowledging at the time that this year's competition had greatly intensified from previous years' competitions. Despite the competition, L-com learned that it had again won a gold award, along with seven bronze awards including two bronze for individual sales reps and one bronze for an individual customer service rep. Other winners in the same category as L-com include bronze statues for Black Box Network Services and Crucial.com. The quantity of awards that L-com received was sufficient to put them in the Top 10 Awards Winners category, as announced on The Stevie® Awards Blog.

"Having won this award for the past two years doesn't diminish the honor and excitement of winning again in 2013," said Les Smock, L-com's Contact Center Manager. "We knew we had to overcome incredible competition to win this year, but we give 100% dedication to customer service every day, and the American Business Awards has recognized that each year."

Previously, L-com won four awards in 2012 and one award in 2011 at this same awards show, along with several other awards at the ABA's other awards shows. L-com's Customer Special Programs and Escalation Supervisor Joanne Gomber was at the ceremony on February 25th in Las Vegas, NV, to receive the award. The individuals at L-com who won bronze awards were Mark DeSousa and Jared Harrison, both Sales Representative of the Year, and Christina Cruz, Customer Service Representative of the Year.

L-com LogoL-com is a designer and manufacturer of wired and wireless connectivity equipment.