Attorney Chris Davis announces the release of a published white paper report that explains the financial benefits afforded to accident victims who hire an attorney to represent them. 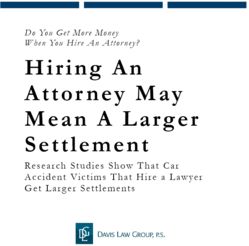 [T]he statistics show that people with more significant injuries who hire an attorney receive a substantially higher settlement at the conclusion of a case than those who do not.

Seattle attorney Chris Davis, who has published several informational books on the personal injury legal process, announces the release of his latest white paper report, “Hiring An Attorney May Mean A Larger Settlement.”

The report, which is available as a free PDF download on the Davis Law Group Website, cites several industry studies – including one from the Insurance Research Council (IRC) – that track the success of plaintiffs who handed their claim alone compared to those who hired an attorney.

“Not all accident victims are going to benefit from hiring an attorney for their case,” says Davis. “But the statistics show that people with more significant injuries who hire an attorney receive a substantially higher settlement at the conclusion of a case than those who do not.”

In Davis’s report, readers will find real-world examples of the types of injuries that may call for consulting with an attorney and the average dollar value of settlements paid to those who eventually hired a lawyer for their case.

For example, one study from the IRC showed that approximately 85 percent of all settlements paid out by insurance companies were to claimants who had hired an attorney to represent them.

“The minute an accident victim decides to pursue a personal injury claim, they unknowingly enter into battle with the insurance companies and are at an immediate disadvantage when it comes to being fairly compensated,” Davis added. “My goal with this report is to help victims understand why hiring an attorney may be financially beneficial.”

About Chris Davis
Christopher M. Davis, founder of the Davis Law Group, has been a licensed attorney in the state of Washington since 1993. He has tried dozens of personal injury cases to verdict and has successfully handled and resolved hundreds of accident claims. He has been a Washington ‘Super Lawyer' for seven years in a row for his expertise and success in litigating personal injury claims. You can learn more about the firm by visiting: http://www.DavisLawGroupSeattle.com.