The mission to help a friend that was a stay-at-home mom earn much needed income led Brian Mathews to uncover more than 47 free apps that would help her and others use their iPhone and iPad to earn that money. 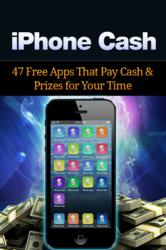 At this price, it is clearly not my intent to 'strike it rich,' but to offer a viable way for others to make money to help make ends meet or just pay for the costs of owning iPhones and iPads

Like millions of people that have been devastated by the down economy, Brian Mathews was nearly heartsick watching a friend’s family reeling from her husband’s loss of income as the market shifted. The friend, who was a stay-at-home mom, was struggling to find ways to help her husband bring income into the home after the economy devastated what was once a lucrative sales commission income. “With the high expense of childcare, most people are working forty hours just to pay for that expense, which wasn’t an option for my friend that wanted to be there for her kids,” said Mathews.

It was the combination of a news article and his own son’s market research side income that led the professional market researcher to the possible answer and what would eventually become the book “iPhone Cash.” For several years, Mathews’ son had been making $100 to $150 a month participating in market research surveys and had been involved in market research when Disney's hit show, Phineas and Pherb was in the market research phases. “After reading an article about an app called GigWalk that claimed users were earning over $6,000 per month, I put together the idea of legitimate paid surveys and the success people were having with Gigwalk, which spurred me to do more research,” said Mathews.

As a professional market researcher, Mathews found that there were numerous legitimate companies that were using iPhone apps as a way to reach people for market research. From apps that paid cash and prizes for participating in surveys and snapping photos of their grocery receipts, to mystery shopping and scanning barcodes in grocery stores while shopping; the list seemed to be almost endless.

After compiling a list of dozens of apps, Mathews met with his friend and worked with her to sign up for many of the legitimate companies that had the best offers. Her ambitious nature and hard work earned her over $400 in the first month and she continued to increase her income each month. With that proven success, she suggested that Mathews put the list into book form to share with others that were in the same situation.

The result was the new book “iPhone Cash,” which gives iPhone and iPad owners countless ways to use their devices to make money. The new book is available in Kindle format for just $2.99 at Amazon. “At this price, it is clearly not my intent to “strike it rich,” but to offer a viable way for others to make money to help make ends meet or just pay for the costs of owning iPhones and iPads,” said Mathews. For more information, please visit http://www.iphoneappsthatpay.com

The new book “iPhone Cash” uncovers 47 free apps backed by legitimate companies that pay the iPhone and iPad users for completing small tasks on their iPhone. These include market research surveys, mystery shopping, conducting price checks in nearby stores, sending photos of their grocery receipts, testing new apps, and many more. Brian Matthews is a professional researcher and accomplished author specializing in uncovering legitimate work-from-home jobs and online business opportunities. Matthews has been helping others work from home since 1995.