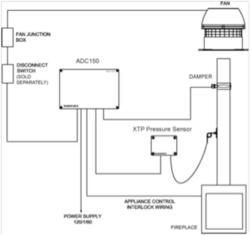 A schematic view of the new ENERVEX Intellidraft system, showing the ADC 150 controller, which monitors safe operation of the gas fireplace and chimney.

Addressing the challenges of fireplace safety while saving energy, the global leader in mechanical chimney exhaust systems ENERVEX Inc. has introduced a breakthrough in draft control and safety monitoring for gas-fired fireplaces and similar decorative gas appliances. The new product, ENERVEX Intellidraft™, connects the chimney fan and damper with a patented controller that monitors the fireplace and draft in the chimney. Manufacturers in the hearth industry have welcomed this cost-effective advance, according to ENERVEX.

ENERVEX Intellidraft is the first system ever designed to maintain safe and proper minimum draft required in the chimney while protecting the fireplace from dangerous chimney downdraft and fireplace spillage, two common issues. The system also automatically shuts down the fireplace gas supply if unsafe conditions – often caused by “depressurization” – cannot be corrected by fan speed. The product also closes off the chimney when the fireplace is not being used, saving energy and meeting the requirements of new, strict energy codes.

“Ideal for multifamily buildings and single-family dwellings alike, Intellidraft automatically assures safe operating conditions related to the operation of gas fireplaces and other gas-fired, decorative appliances,” says Steen Hagensen, president of the U.S. manufacturer, ENERVEX. “The big issue today is maintaining proper draft in the fireplace chimney and the room providing it air for combustion. Intellidraft is designed specifically to meet these needs.”

An elegant and simple solution, ENERVEX Intellidraft connects a purpose-built controller, the ADC150, to the chimney fan, the damper and the fireplace’s gas valve. When the fireplace calls for heat – typically using a wall switch – the ADC150 signals the mechanical fireplace damper (MFD) to open. When the damper is open, the controller automatically ramps up the chimney fan speed until the draft setpoint has been reached and the Proven Draft Switch (PDS) closes. At this point, the ADC150 allows the fireplace to start by closing the dry contact on the appliance output, letting the gas valve open.

“Best of all, if for any reason the draft setpoint can’t be maintained during operation, the ADC150 control will completely shut down the fireplace or appliance operation,” says Hagensen. “This is yet another advance for the hearth and gas-heating industry, which has been proactive in consumer safety and energy efficiency for today’s dwellings.”

Presented recently at the industry events including the AHR Expo in Dallas in January, the ENERVEX Intellidraft system reaffirms ENERVEX’s position as a leader in innovative design and production of demand-controlled mechanical draft and exhaust systems. The system will be introduced to the fireplace industry at the HPBExpo in Orlando in March 2013.
According to hearth industry OEMs, engineers, and residential building owners and developers, draft control is major factor in achieving efficient combustion for gas-fired fireplaces and similar appliances. Excessive or insufficient draft can result in increased fuel consumption and unnecessary carbon emissions. Lack of draft control – a widespread issue – can also result in dangerous issues from building depressurization, spillage from the fireplace, and other situations that can be unhealthy to building occupants or even hazardous.

Ensuring a proper draft requires that a minimum pressure differential be maintained between the chimney and the room supplying combustion air for the gas-fired fireplace or appliance. Industry tests conclude that – for safe operating conditions – a minimum pressure differential of 0.02 inch WC (5 Pa) should be consistently supported. “Until now, no system has been able to provide this condition,” says Hagensen. “Intellidraft has been designed and manufactured by ENERVEX specifically to meet this need – a first for the hearth industry.”

The ENERVEX Intellidraft system addresses all the relevant safety and energy-efficiency concerns in one cost-effective, code-compliant system. Added to a gas fireplace as a retrofit or in a new building project, the easy-to-install Intellidraft suite provides a completely safe gas appliance system:

For more information on the ENERVEX Intellidraft system, visit http://www.ChimneyFans.com or call Enervex at (800) 255-2923.

About Enervex
ENERVEX Inc. is a global leader in the design and supply of demand-controlled mechanical draft and exhaust systems with a focus on innovation, design and environmental sustainability. Based in Alpharetta, Georgia, ENERVEX operates in a number of countries with an emphasis on the United States, Canada, Central America and the Middle East. ENERVEX markets the most extensive portfolio of residential and commercial demand-controlled exhaust systems available. The company's global business is 70% commercial – offices, healthcare, education, sports facilities, multi-family and mixed-use buildings, hotels and resorts – and 30% residential. ENERVEX celebrated its 20th anniversary in 2010.