On March 4, Bancroft Press launches its first ever illustrated children’s book, J. Scott Fuqua’s Calvert the Raven in The Battle of Baltimore. The first book of the Flying Through History series, Calvert the Raven explores the War of 1812 battle that inspired “The Star-Spangled Banner.” 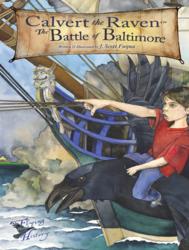 When a magical wise-cracking raven named Calvert takes Daniel back in time to the Battle of Baltimore, he discovers a world of real soldiers fighting a real battle, with the fate of the United States of America at stake.

Beginning September 13, 1814, British soldiers launched a historic assault on Baltimore, MD’s Fort McHenry. The survival of the fort and its flag, and the subsequent withdrawal of British troops, would prove a defining moment in the War of 1812 and inspire the eventual United States national anthem, “The Star-Spangled Banner.”

Nearly 200 years later, Bancroft Press is commemorating perhaps the most important moment in Baltimore’s history with the launch of its first children’s book, Calvert the Raven in The Battle of Baltimore.

“Calvert the Raven was an attempt to strip away the dusty, formal feel of history,” says author and illustrator J. Scott Fuqua. “I wanted to make it immediate.”

In Fuqua’s beautifully illustrated story, a Baltimore boy named Daniel has just received a poor grade on an awful history paper, but he doesn’t really care. History is boring anyway. But when a magical wise-cracking raven named Calvert takes Daniel back in time to the Battle of Baltimore, he discovers a world of real soldiers fighting a real battle, with the fate of the United States of America at stake.

“When the British invaders turned their attentions to Baltimore, the city was ready,” says Burt Kummerow, president of Historyworks, Inc. and the Maryland Historical Society. Kummerow has been involved with the book from the beginning. “It was a moment of triumph that propelled a fragile young republic into the future.”

“Daniel is surprised by the very real fear and tension experienced by people so much like him,” says Fuqua. “Calvert is willing to risk his own skin to provide Daniel with a new and different understanding of the past.”

Early praise for Calvert the Raven has been stellar. Booklist said it “will find a place on library shelves,” adding that “the breezy tone and plenty of dialogue will draw in readers, and the dramatic, well-executed watercolors add impact to the telling.”

And library service Brodart called Calvert the Raven “an interesting book that makes it easy to teach kids about the War of 1812,” concluding that libraries should “add this great title to your collection for patrons age seven to ten.”

This is not Fuqua’s first book for young readers. Other such works include Catie and Josephine, The Adventures of MT Pitt, and The Synagogue Speaks. He’s received acclaim for books like graphic novel In the Shadow of Edgar Allan Poe and young adult novel The Reappearance of Sam Webber, which won the coveted Alex Award.

“Scott is an amazing author,” says Bancroft Press publisher Bruce Bortz. “I’d publish all of his books if I could. We’ve never published an illustrated children’s book before, and there’s always some risk when trying something new, but when the book is as wonderful as Calvert the Raven in The Battle of Baltimore, there’s far less risk.”

Calvert the Raven in The Battle of Baltimore will be available at Amazon, Barnes & Noble, and bookstores everywhere, in hardcover, paperback, and ebook, on March 4. Fuqua will be signing copies at Baltimore's Power Plant Barnes & Noble on Saturday, March 9 at 2 p.m.

Baltimore-based Bancroft Press has been a leading independent general interest publisher for the past 20 years.