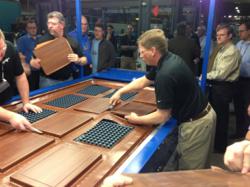 The 3D-SmartPress is the latest membrane laminating press technology introduced by Black Bros.

Black Bros. recently held their highly anticipated February 3D Forum, which was hosted at their facility in Mendota, IL, about two hours outside of Chicago. Black Bros. is a premier coating & laminating machine manufacturer, in business since 1882. The family-owned company produces gluing equipment, coating machines and laminating machines. They can provide single machines or complete systems and, today, they are the largest manufacturer of laminating, gluing, roll coating, and finishing machinery in the U.S. The 3D Forum commenced on Wednesday, February 20, 2013, with a dinner reception and continued on Thursday the 21st and Friday the 22nd with presentations, group discussions led by industry leaders, as well as live demonstrations and trials. While the conference was based around conversations regarding the design aspects of 3D laminates in both 2D and 3D applications, the highlight of the forum was the unveiling of the new 3D-SmartPress.

The 3D-SmartPress is the latest membrane laminating press technology introduced by Black Bros. The new press is touted as an improvement to the industry favorite “Shaw Almex” membrane press. The 3D-SmartPress automation is accomplished with newly created SmartPin Technology. Black Bros. held live demonstrations of SmartPin Technology at their forum, exhibiting the advantages of a system that can scan the work piece in process and automatically configure its pins to match the contours of the item. This allows for the easy automated lamination of complex projects like organic shapes, cut-outs, glass door frames and it reduces failures by allowing an operator much more flexibility while supporting components during lamination. If needed, the SmartPin System also allows the operator to drop pins manually by simply twisting the pin body. The SmartTray makes the 3D-SmartPress the only pin system on the market that allows for two different pin heights to be used in the same press, both 12 mm pins and 18 mm pins.

The 3D-SmartPress can be adapted through the many optional configurations available. These include a basic configuration with a manual tray, or chain-driven tray, or even twin trays which shuttle through the 3D-SmartPress like a pendulum. The 3D-SmartPress includes automation options: a tray garage, over under processing, a standard integrated flipping unit, and other available optional features. It can be arranged as a single tray press or as a two tray system with an elevating unit, which doubles as a holding station for a flipping unit. This unique two tray configuration is an optimum setup because it requires very little movement of the operator and creates a highly efficient work unit. The innovative system is easy to operate and maintain because the SmartPin system is external. The 3D-SmartPress includes 5GB of storage to preserve pre-set tray configurations. The computer software also provides opportunities to make the laminating process more efficient. After unveiling the novel 3D-SmartPress at their 3D Forum, Black Bros. is leading the way in laminating press technology.