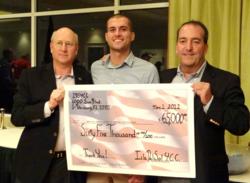 The generosity of our membership never ceases to amaze me. Whether it's support for the needy through our annual 'Play for Hunger' event or this tournament, our members have always supported worthy causes with their time and money.

The field of forty foursomes was primarily made up of strong support from Isla del Sol club members. Also in the field were company-sponsored teams from the BB&T, General Dynamics, American Strategic Insurance and Manheim Auctions. The team of Jesse & Denise Javens and Bill & Karen Gonzalez placed first overall in this second annual tournament. Following the golf tournament, over 250 people enjoyed a full night’s activities emceed by Dick Crippen, Executive Director of Community Development for the Tampa Bay Rays. The event included numerous raffle prizes, over 60 silent auction items and six live auction items. Isla del Sol is very grateful to the local businesses, club suppliers and club members who donated to this cause. The total amount raised for the foundation was over $65,000. Steve Riordan, Chairman of the Tournament Committee, stated “The generosity of our membership never ceases to amaze me. Whether it’s their support for the needy through our annual ‘Play for Hunger’ event or this tournament, our members have always supported worthy causes with their time and money.”

The Special Operations Warrior Foundation provides full college educations to the surviving children of fallen Army, Navy, Air Force and Marine Corps special operations personnel. Logan Fitzpatrick, a graduate of the SOWF program, gave an emotional speech about SOWF and his father, Captain Charles Cooper, who was killed in action and subsequently awarded the Silver Star and Distinguished Flying Cross for his service to our country. Logan stated, “As children we were contacted by the SOWF and they were able help us get through our difficult time, as well as introduce us to other children and families going through similar situations. If it wasn't for people like you and the Special Operations Warrior Foundation, the financial enormity of college may be out of reach for many families like my own. I just wanted to say thank you all so much for everything you do and to please keep doing it,” he explained.

“The greatest measure of respect that we can bestow upon a fallen hero is to make sure their family is never forgotten,” said John T. Carney Jr., SOWF President and retired Air Force Colonel. “It speaks volumes that the folks at Isla Del Sol Yacht & Country Club opened their hearts and extended a warm embrace to the families of fallen heroes. Their generosity will ensure the children of fallen special operations warrior receive a college education and the sacrifice of their fallen parent will never be forgotten.”

Come Play On Our Island