SerialKickers is launching the ArchMount, the first pocket-sized tripod mount for the iPad. It is designed for those who want to do more with their iPad without adding bulk or creating a barrier between user and device. 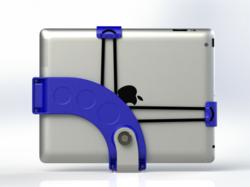 Image of an Archmount attached to the iPad and optional bracket. The mount, which uses bungee cord, complements the form of the iPad, and the whole mount can be slipped into your pocket or purse.

The ArchMount is the first pocketable tripod mount for the iPad. It is lightweight, sturdy, easy to use, and beautiful.

SerialKickers is launching the ArchMount, the first pocket-sized tripod mount for the iPad. Steve Guzman, of the SerialKickers’ states “We set out to create an ultra-convenient, affordable tool to make iPads even more versatile for hands-free use. We didn’t want to add bulk or create a barrier between the user and the device.” They ended up combining the flexibility of bungee cords with a small, rigid plastic arch, to make what may be the most lightweight and convenient tripod mount for the iPad. The whole mount can be slipped into a pocket or purse.

When used with the a mini-tripod, like the Gorillapod, the ArchMount is a flexible stand for tabletop use at home or office, for activities such as hands-free Skype, or as an extra monitor. When used with taller tripods, the ArchMount enables well-controlled capture of audio and HD video. The ArchMount’s portability is appealing to travelers and for remote reporters. Solo video bloggers can use ArchMounts to incorporate iPads as front-facing monitors for photography and video recording.

The ArchMount securely grasps the iPad without damaging it and without compromising the beauty of the iPad’s artfully crafted engineering. “The concept was to show the world that tablet computers can be more than ­just e-readers, or on-the-go internet devices,” says Steve. Travelers can pack a tripod to turn their iPad into a stable camera or video recorder. Video content creators for social media have been testing the ArchMount for use as a teleprompter and video blogging tool.

A strong emphasis is the all-in-one aspect of the iPad for uses such as:

The ArchMount is available for preorder through Kickstarter at ArchMount.com for a limited time, at a reduced price. Those interested in owning an ArchMount should visit http://www.ArchMount.com before March 18th, 2013 to be a contributor to the development of this clever, new tool. Upon successful completion of the current Kickstarter campaign, the SerialKickers, intends to expand the concept for use with other tablet computers, including iPad mini, Kindle, Android and Windows tablets.

The Austin, Texas based design team, SerialKickers, is dedicated to the development of communication technologies that democratize quality content generation and distribution.

ArchMount by SerialKickers Press ReleaseSerialKickers is launching a small, light and simple tablet computer mount, the ArchMount, which allows the popular iPad to be used with any tripod.