The Columbia Center for Theatrical Arts (CCTA) created a theater troupe for adults with developmental disabilities designed to provide them with positive, life-changing experiences. 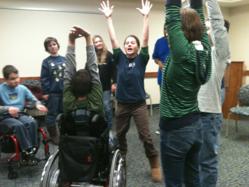 Company members in New Horizons range in age from 16-28 and grapple with a variety of disabilities including Autism, Aspergers, Down Syndrome and Cerebal Palsy.

The Columbia Center for Theatrical Arts (CCTA) is using the power of theater to create New Horizons for adults with developmental disabilities.

Every Friday night, 15 members of the New Horizons Theatre group meet at the Howard County General Hospital in Columbia, MD. The goal of the program is to provide positive, life-changing experiences and social opportunities for individuals with disabilities.

New Horizons grew out of the popularity of CCTA's theater program for special needs youth in middle and high school. In 2009 the organization formed a partnership with Loyola University Maryland's Clinical Center to create a program that delivered speech and social therpy through musical theater. Loyola's speech-language pathologists were serving a growing number of children on the Autism spectrum and with other communication disorders. CCTA was including four to five special needs children per year in its classes and camps but wanted to serve them in a more productive way. The result was Expanding Horizons: Broadway Kids, a weekly class serving youth ages 10-17 with 45 minutes of traditional therapeutics followed by 45 minutes of theater that incorporated those therapeutics. The program grew in 2010 to include a third partner, the Howard County Public School System, and now offers programs in two county schools and a Saturday morning class younger students.

The fifteen members of the New Horizons troupe range in age from 16-28 and grapple with a variety of disabilities including Autism, Asperger’s, Down Syndrome, Cerebral Palsy and others. Instructor Amy Sonntag is rehearsing with them for a spring performance of A Broadway Revue that features songs form "Cabaret," "The Music Man" and "High School Musical." Sonntag is a professional actor with a degree in Musical Theater from Catholic University. She is pursuing a Master's degree in Occupational Therapy form Towson University and feels that theater is the perfect conduit for improving movement, confidence, eye contact, social skills and much more. Together with five theater-loving volunteers, she leads a game of charades as a warm-up before diving into the business of learning songs, choreography and lines.

Space for the program has been donated by the Howard County General Hospital in Columbia, MD. Additional support was provided by Columbia Bank and CVS/Caremark. New Horizons will run through May, break for the summer and resume in September.

ABOUT CCTA: The Columbia Center for Theatrical Arts (CCTA) is a well-respected arts nonprofit with over 40 years of experience and service to the youth of the Baltimore-Washington area. It was founded in 1972 by Toby Orenstein with a mission to educate through the arts by creating theatrical experiences that inspire thought, action, creativity and change. CCTA serves approximately 30,000 individuals annually with a CONSERVATORY program of classes, camps and workshops; THEATRICAL PRODUCTIONS for schools; and an OUTREACH PROGRAM that makes theatrical experiences accessible to students who are often excluded from mainstream arts programming.