Answering the Intense Demand for Solar PV Through-out the State of California, Ambassador Energy Takes Another Step Toward Full-State Coverage by Building a Local Solar Sales Team in Central Valley

Ambassador Energy executed their latest expansion plan by hiring team leader, Josh Weimer, who will spend his time developing strategic relationships within the agricultural areas along the 99 Freeway from Bakersfield to Sacramento. His team will service farm, residential, commercial and non-profit customers. 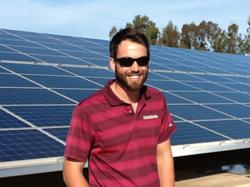 "I look forward to making a significant impact on this area and introducing folks to what I think is the best solar company out there," said Turlock born-and-raised Weimer. "Ambassador Energy initially trained me years ago, when I worked for one of their agencies. Since then, I went back to Ambassador Energy College for my NABCEP EL certificate and decided that I wanted to work directly for AE’s installation division. I know and respect the company, its leadership and its robust plans for growth. Ambassador Energy knows solar, and I want to further my career with their amazing team of experts."

Weimer cut his solar teeth by selling and installing systems throughout the Central Valley for Swenson Solar. He worked on systems ranging in size from 6 kilowatts to 100+ kilowatts with a variety of mounting options, including ground, metal roof, tile roof and shingle roof. "Some were typical," Weimer continued, "and others were completely outside the box. On one farming installation, we had to tear down an old giant chicken house to accommodate 400 solar panels. If we didn't have Ambassador Energy working with us on that, I don't think we could have pulled it off."

Prior to his focus in the solar PV arena, Weimer graduated from California State University Stanislaus as a Political Science major, and worked as Campaign Manager for Mike Berryhill for Congress.

Ambassador Energy’s executive team has high hopes for Josh. "He is one of our youngest, yet wisest employees, showing tremendous leadership ability," said Ambassador Energy president, Kelly Smith. "I see him being a part of our AE family for a long long time."