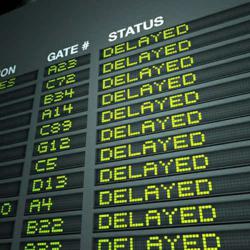 When you have three major airports intersecting with one and other, delays are going to happen.

Statistically speaking, there are some flights in the U.S with consistently poor on time records. The reasons range from heavy traffic flows to chronic weather patterns, such as mid-morning fog, high winds and rain. Unfortunately there isn't anything that can be done to convince Mother Nature to release her grasp on some airports, whose geographic locations put them in areas with known weather patterns. However, there are things in the works to help relieve some of the heavy traffic flowing in and out of the nation’s busiest airports. The FAA is planning to unveil their next generation radar system which will use satellite and GPS data to replace the current, antiquated system widely used today at most major airports.

Business class travel site and travel experts, Lets Fly Cheaper conducted a study using data from the Bureau of Transportation Statistics and flight tracking website Flight Aware to find out which flights are chronically late. Express Jet, a regional airline for both United and Delta was number one with their 6:55 pm flights from Washington Reagan International to Newark’s Liberty International. The flights were operated under the United Airlines brand. “The main reason for this flight’s chronic delay is probably due to the heavy air traffic in and out of the New York area during those times of the day. It’s almost quicker to drive,” says Lets Fly Cheaper CEO, Ramon vanMeer.

Lets Fly Cheaper says they had originally had a response from the FAA lined up regarding the new, next generation of air traffic radar, however, the federal budget cut sequester was preparing to go into affect, cutting numerous jobs at the FAA during their study. They were unable to get a timely response.

Flight delays in the New York area aren't uncommon. “When you have three major airports intersecting with one and other, delays are going to happen,” says van Meer. He also adds that Newark experiences more traffic related delays than any other airport in the nation.

In addition, flights in and out of San Francisco during certain hours of the day suffer numerous fog related delays.

Below are the top flights that experience the most delays on a regular basis according to data from the Bureau of Transportation Statistics and schedule data from flight tracking site, Flight Aware.

Lets Fly Cheaper.com is a low fare specialist, focused on supplying cheap business class flights to international destinations worldwide. To book the lowest fare contact one of their travel agents at 1-800-240-0461 or go to http://www.letsflycheaper.com.