Since streaming falls into a significant multimedia data transmission and application mode nowadays, the way to stream DVD movies to Android and iOS devices also raises concern. The developer of Air Playit has coped with this challenge successfully. 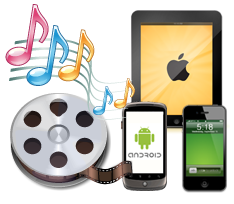 Air Playit is enabled to stream videos such as MKV AVCHD M2TS AVI MP4 MOV YouTube FLV and DVD to Android and iOS mobiles and devices.

Stream mode has become more prevalent in recent years owing to the fast development of multimedia streaming tech, together with the performance of various network and terminal devices. Generally, people can utilize this burgeoning cloud-based tech to stream music and standard videos. Now, Digiarty Software Inc., the developer of Air Playit has coped with the challenge of streaming DVD to Android, iPhone, iPad and iPod touch successfully.

Digiarty is one of the bellwethers developing multimedia entertainment programs. Its Air Playit for iPhone iPad has been downloaded over 4,000,000 times on App Store since the first emerge in the market. Today, this free streaming app welcomes vast users to download the new version of audio video streamer for Android at the official forum:

“We relived our forum in the past week so that everyone can download Air Playit Client for Android with success”, said Jack, CEO of Digiarty Software Inc., who also disclosed that the free streamer for Android is confronted with a huge reform in the following months.

Air Playit for Android is capable of streaming MKV AVCHD M2TS AVI MP4 MOV FLV and all other videos to Android mobiles and devices such as Google Nexus One, Nexus S and Samsung Galaxy S. By working with DVD copy software such as WinX DVD Ripper Platinum (and WinX DVD Ripper for Mac), it can help users stream any DVD (Disney included) movies to Android and iOS devices anywhere anytime.

The operation is simple and is divided into two parts in the whole: the startup is to have DVD videos ready on computer with the help of the DVD ripper; and the next is to stream the converted DVD video from computer to iPhone/iPad/Android by using WiFi or 3G/4G. The combination of the two programs makes an omnipotent tool for family DVD movie playback, regardless of DVD copy protections and video formats. For example, users can access latest movies, YouTube or camcorder videos stored on computer through Apple and Android in portable way. (Tutorial to stream DVD to iPhone iPad)

Price and Availability
Both the server and client of Air Playit are totally free of charge. Users may download server of Windows or Mac edition on official webpage directly. The client for iPad/iPhone/iPod is available on Apple iTunes Store, but the official forum is still the sole channel to download Air Playit for Android: http://forum.airplayit.com/viewthread.php?tid=380&extra=page%3D1