Medical Research on PH 8.8 Alkaline Drinking Water Discovers its Health Benefits for Those Suffering From Heartburn or Acid Reflux Disease

Gastroesophageal reflux more commonly know as acid reflux disease or heartburn is a digestive disease which occurs when stomach acid flows back into the esophagus. Recently medical researchers have discovered that drinking higher PH 8.8 alkaline water will permanently inactivate pepsin in the human stomach preventing the onset of symptoms of acid reflux disease. 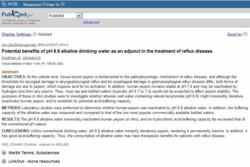 Medical scientist at the Voice Institute of New York discovered that drinking higher PH alkaline water inactivates pepsin in the stomach offering relief from symptoms of acidic reflux. At the cellular level pepsin is the root cause of reflux disease and in the human stomach the introduction of acid from acidic foods or liquids will activate pepsin. Pepsin is the enzyme released by cells in the stomach wall which degrades food proteins into peptides enabling digestion. Since pepsin remains stable at a PH of 7.4 researchers hypothesized if consuming higher PH alkaline water could inactivate pepsin in the stomach and thus prevent the onset of symptoms of reflux disease.

Drinkers of higher PH alkaline ionized water from Bawell water ionizers have long reported the relief felt after drinking water from the machines. Drinking this water daily inactivates pepsin in the users stomach and returns the body to a more alkaline state. There are many causes of acid reflux disease but the most common is “the consumption of acidic foods and liquids such as alcohol, carbonated drinks, chocolate, citrus fruits like oranges and lemons, coffee or tea, etc”(WebMD).

The Bawell company has long advocated the consumption of alkaline foods and liquids to balance out the over consumption of acidic foods in industrialized society. Bawell supplies this ability with their four household ionizer machines which enable the user to create alkaline drinking water of any PH from 7.0 to 11.0. Medical research may just be confirming the health benefits of drinking this water but the Bawell company has long know of the health benefits of drinking alkaline ionized water. Bawell has been supplying its customers with the therapeutic effects gained from drinking this water for the past 10 years.