Company registrations reached a record high in Luton during 2012, according to the annual Duport Business Confidence Report for the area. 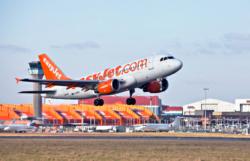 Easyjet HQ is in Luton

Company formations in Luton climbed to their highest ever level during 2012. There were 1841 new company registrations over the year - more than any other year on record for the area and a 20% rise on the previous year.

In further good news for the town, net company growth increased by 58%, well ahead of the UK average of 44%. The UK company share of Luton also rose from 0.3% to 0.4%.

The local economy of Luton was traditionally focused on several different areas of industry including car manufacture, engineering and millinery. However, the town is moving towards a service economy, mainly in the retail and airport sectors. Regeneration plans for the area aim to create a more modern and diversified economy.

“It is great to see that, despite the tough economic climate, a record number of people chose to set up new businesses in Luton last year. Entrepreneurial initiative such as this bodes well for the future of the local economy.”

The Duport Business Confidence Report for Luton contains a wealth of data that can be analysed to gain an insight into the local business landscape. More information and statistics can be found at http://www.duport.co.uk/luton.