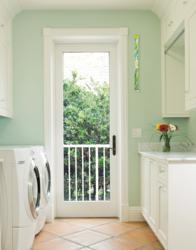 The VisiLure™ Fly Tape is not your grandmother’s gooey brown fly ribbon. The first thing you notice is the attractive appearance, but we didn’t create it just to look pretty. There’s a scientific reason we chose the colors and patterns we did."

With the new electro-retinogram (ERG) in their insect research lab, RESCUE!® scientists have created VisiLure™ technology to lure bugs with colors, shapes and other visual stimuli to which they respond.

For over 30 years, RESCUE!® has innovated the consumer insect control category by luring insects to traps with scent-based attractants – namely, pheromone and feeding lures. Now, they’re branching out by using visual cues to attract the insects.

The first RESCUE!® products to employ this technology are the new Fly Tape, on store shelves now; and TrapStik™ for Flies, on the market this summer. Both products lure common nuisance or filth flies to a sticky surface with a three dimensional pattern and color combination they find most attractive.

“The VisiLure™ Fly Tape is not your grandmother’s gooey brown fly ribbon. The first thing you notice is the attractive appearance, but we didn’t create it just to look pretty. There’s a scientific reason we chose the colors and patterns we did,” says Rod Schneidmiller, president and founder of Sterling International, manufacturers of RESCUE!® products.

Using the ERG, RESCUE!® scientists measured photoreceptor responses in flies’ retinas to different wavelengths of visual stimuli to identify the most attractive colors and intensities. Further lab and field behavioral experiments indicated that the color patterns and contrasts mimicking the natural visual characteristics of flies were most appealing.

“Flies have large compound eyes that don’t focus so they see everything as a blurry image. The 3-D pattern and color simulate an image on which the flies can better focus,” explains Schneidmiller.

The new Fly Tape is easy to unroll and hangs flat rather than curling up, leaving more surface area to catch flies. Because it has no odor, it can be used both indoors and out. As with other RESCUE!® products, Fly Tape and TrapStik™ are made in the USA.

Schneidmiller indicates that more VisiLure™ products which target different insects are forthcoming, including one to be unveiled at the National Hardware Show in Las Vegas May 7-9.
Established in 1982, Sterling International, Inc. offers RESCUE!® traps and attractants for stink bugs, wasps, hornets, yellowjackets, flies, Japanese and Oriental beetles and more. These products are prominently on shelves at home improvement centers, hardware stores and lawn & garden retailers throughout the U.S. and Canada.

For more information on VisiLure™, visit http://www.rescue.com/visilure. You can also follow RESCUE! ® on Facebook and Twitter. A retail locator including stores in the U.S. carrying Fly Tape can be found at rescue.com/retailer-map.

The new RESCUE!® Fly Tape is made in the USA