Early Spring is the Time to Begin Controlling Wasps, Hornets and Yellowjackets

Catch the queen with the environmentally friendly RESCUE! ® W•H•Y® Trap to control wasps, hornets and yellowjackets from the start of the outdoor season. 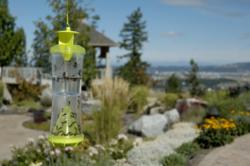 In early spring, queen paper wasps, hornets and yellowjackets emerge from overwintering to look for new nest sites. For states east of the Rocky Mountains, the time to capture them is St. Patrick's Day, in mid-March.

The promise of spring is in the air: Warm breezes, greening leaves, bursting blooms—and the threat of a new onslaught of wasps, hornets and yellowjackets. Nothing can put a damper on the prospect of spending time outdoors after a long, dreary winter like the presence of these stinging creatures in flight.

To lower the chances of wasps, hornets and yellowjackets spoiling outdoor celebrations and activities later on in summer, pest control experts recommend early action to catch the queens now before they can start building their brood.

“In early spring, the queen paper wasps, hornets and yellowjackets emerge from overwintering to look for new nest sites,” explains Rod Schneidmiller, president of Sterling International, a developer of environmentally friendly pest control products. “The best time to capture the queen is before they begin constructing nests. For the states east of the Rocky Mountains, the time to strike is St. Patrick’s Day, in mid-March.”

Each queen caught prevents one nest of potentially hundreds or more dangerous insects from being built later on.

The RESCUE! ® W•H•Y® Trap for Wasps, Hornets & Yellowjackets from Sterling International is ideally suited to entice and trap these queens and their offspring. What lures the wasps, hornets and yellowjackets is a specially formulated attractant.

“Using a three-pronged approach of attraction—two liquid forms and one gel—the RESCUE! ® W•H•Y® Trap lures only wasps, hornets and yellowjackets,” says Dr. Qing-He Zhang, Sterling International’s lead scientist and director of research. “This trap will not lure in beneficial pollinators such as honeybees,” ensures Zhang.

With the nation’s honeybee populations at risk due to a multitude of man-made factors, RESCUE! ® W•H•Y® Trap users can rest assured they aren’t adding to the pollinators’ problem.

The double-chambered trap is a one-two punch in the capture and control of five species of paper wasps, bald-faced hornets and European hornets along with twelve species of yellowjackets. And once the insects are in the trap, they’re in for good. The non-toxic mode of action means they die by drowning or dehydration.

Proper Placement for Best Impact
The correct positioning of the RESCUE! ® W•H•Y® Trap is key to capturing both the queen and her workers. Place the trap at least 20 feet beyond areas that experience high outdoor activity, such as a patio, picnic spot, or a child’s play set. This ensures the insects will be lured away from human activity.

The general rule of thumb, Schneidmiller says, is to place the trap closer to a structure such as a house or shed for areas troubled with paper wasps, and closer to a garden or tree line for areas troubled with hornets and yellowjackets. Multiple traps positioned around the perimeter of a yard or open space will go a long way in controlling these pests, making the great outdoors much more pleasant.

The RESCUE! ® W•H•Y® Trap is durable enough to last multiple seasons and works for weeks with little to no maintenance. The trap is sold with a two-week attractant kit, and can be easily rebaited with attractant refills throughout the summer and fall for continued wasp, hornet and yellowjacket control. No additional food or materials are required.

Established in 1982, Sterling International, Inc. offers RESCUE!® traps and attractants for stink bugs, flies, Japanese beetles, Oriental beetles and more. Look for these products and the RESCUE! ® W•H•Y® Trap at home improvement centers, hardware stores and lawn and garden retailers throughout the U.S.