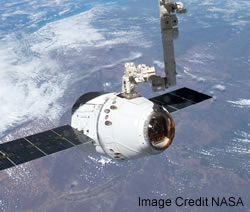 A view of the SpaceX Dragon cargo craft taken from the ISS. From this view MLI material can be seen on the capsule door.

Dragon is a rocket-launched multi-stage reusable spacecraft that NASA selected to succeed the Space Shuttle as the International Space Station’s U.S. supply vehicle. According to NASA, SpaceX's Dragon capsule will carry 1,200 pounds of supplies to the ISS. The capsule is expected to link up with the ISS on March 2 and then remain docked for several weeks while astronauts unload its cargo.

Once unloading is complete, astronauts will load experiment samples into the capsule for the return to Earth, which is anticipated to take place March 25. Dragon will be bringing back more than twice the payload of experiment samples than what it launched with.

Protecting the contents on board Dragon AND the ISS are DUNMORE MLI blankets and wire wrap. These materials consist of lightweight reflective films assembled in many thin layers. This construction provides thermal protection for key areas of the Dragon capsule, such as around its hatch door, instrumentation and propellant tanks. DUNMORE insulation tapes are also used around its circuitry and insulation films around sensitive instruments.

DUNMORE is a major supplier of high-performance films for aerospace. DUNMORE materials are at work on the Hubble Space Telescope (HST), the International Space Station (ISS) and multiple NASA missions including Juno and NuSTAR. DUNMORE is also supplying MLI materials to the Mars Science Laboratory “Curiosity” mission.