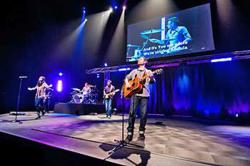 We wanted to bring the congregation’s attention to a central location. Thus the single large impact screen above the stage.

Revolution Church had a dream: to create a permanent home for a rapidly expanding fellowship that would, step by step, adapt to most effectively spread the gospel. However, the founding members were concerned that moving directly into a massive space might compromise the intimacy and focus that had been built over years of worship in small, improvised locations. With this in mind, the church created and implemented a staged growth plan that delivers immediate impact through an immersive yet budget-conscious audio and video experience. Additionally, Revolution Church can expand their current capabilities to serve future members without losing their cherished community feel.

As the decision to design and inhabit a permanent worship location was a massive leap of faith, Revolution Church relied on the renowned insight of both Cornerstone Media and New Ground consulting groups. Once the key audio and video components were tentatively specified, key team members from the church attended WFX, the annual worship facilities expo, to see live product demonstrations and meet some of the manufacturers. Chad Elliot, executive pastor for Revolution Church, mentioned “how impressed we all were with Digital Projection International’s relationship-oriented approach,” at that particular meeting. After WFX, final decisions were made on the preferred AV components.

Currently, the main sanctuary contains 750 seats, and features a stage and large Da-lite screen that is illuminated by Digital Projection International (DPI)’s 8,000 lumen E-Vision 1080p 8000 projector. Elliot explained, “The main sanctuary is quite wide, and we wanted to bring the congregation’s attention to a central location. Thus the single large impact screen above the stage.” With overall project cost being a major factor, the E-Vision 8000 fulfilled both the budget and performance requirements. When it’s time to activate their next stage of expansion, Revolution will finish a balcony that will add 400 seats to the venue. At that time, a larger central screen will serve as a beacon above the stage, while flanking screens on the left and right will serve those in the balcony.

Brian Damerow, media director for Revolution Church, commented, “In our temporary space we used lower-end projectors with limited brightness and impact. We knew what sort of experience we wanted to deliver on Sundays, but had few options until we moved.” Today, the church uses a BlackMagic switcher to route live video, custom-created messaging, congregation announcements and thematically-geared imagery throughout the facility. So that every attendee has an unhindered sight line, the E-Vision 1080p 8000 delivers virtually latency-free IMAG to the central screen above the stage.

After only three weeks in the new space, Revolution Church is already seeing a huge return on their expansion. “Previously,” said Elliot, “we would serve less than 1,100 members on a given Sunday. Now, there’s a huge buzz in the community regarding what we’re doing, and it’s led to a surge in membership.” In fact, the new space has hosted over 1,700 people every Sunday for the last three weeks. To ensure that everyone who wants to attend will have ample opportunity, the church is moving from two Sunday services to three as of their grand opening on March 3, 2013.

With so much at stake in this ambitious step forward, Revolution Church was careful to select only manufacturer partners that seemed to take their project to heart. “We instantly felt understood by the DPI team, and the personal connection put us at ease,” remarked Damerow. “True to form, we had to switch a lens on the E-Vision at the time of installation, and we had the new lens almost immediately. DPI’s attention to such a small detail proved to us that they care about our project as much as we do.”