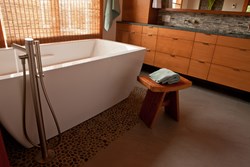 Great attention to detail and a high level of craftsmanship from the remodeling team ensured that the iconic design and architectural heritage of the home wasn’t compromised.

Portland and Seattle remodeling contractor Hammer & Hand announced today the completion of a master bathroom remodeling project in a Bill Fletcher-designed Portland home. Collaborating with Mary Hogue of MKM Architecture and Vida Shore of Vida Shore Design, the remodeling team was tasked with preserving an architectural aesthetic iconic to the Pacific Northwest.

“We contacted a lot of different contractors for input on the remodeling project,” said homeowner and photographer Antoinette Sharp. “We have great respect for the home’s architect, Bill Fletcher, so we were impressed when we interviewed Hammer & Hand and saw their dedication to staying true to the architectural integrity of the home.”

In the early 1960’s, Portland’s own William Fletcher and his “14th Street Gang” of architects began designing homes and buildings that would come to define the Pacific Northwest Landscape. Known for their use of materials indigenous to the region, exposed lumber, and leverage of natural light, the buildings are designed to become part of their natural surroundings rather than being built on top of them.

“The house featured a lot of open beam work and exposed lumber,” said Hammer & Hand project manager Alex Daisley. “The bathrooms had only partially exposed beams and weren’t like the rest of the home.”

As the remodeling team began fully exposing the beams in the bathroom, they faced the challenge of matching the finish of the newly exposed beams with the existing beams.

“The existing open beams had been exposed to UV light for years,” said Alex. “Trying to match the finish of the newly exposed beams with the existing beams was a challenge in and of itself but we were able to restore them to match the rest of the home.”

Great attention to detail and a high level of craftsmanship from the remodeling team ensured that the iconic design and architectural heritage of the home wasn’t compromised.

“I have never done a remodeling project before so I didn’t know what to expect,” recalled Antoinette. “I was concerned about the beams in the bathroom matching the beams in the rest of the house but I was relieved when Alex assured me that no matter what happened, they would keep working on it until I was happy in the end.”

About Hammer & Hand
Hammer & Hand is a construction company dedicated to inciting evolution in building through service, science and craft. The firm collaborates with clients and architects to build the best of the Northwest, from new custom homes, to residential remodels, to commercial renovations.