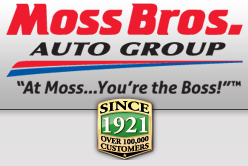 “At Moss Bros. Auto Group, we want to give our community the best car dealership service possible,” said Glenn L. Moss, Sr. “When the dealership re-opens in March, we will continue to offer the best prices around, with the best customer service in the business, and with an even better look. Why do we do this? Because 'At Moss…You’re the Boss!'”