Cruise Canada RV Rental and Sales prepares to celebrate the completion of two and a half decades in the industry. From a modest inventory of 12 rental RVs to over 4000 today, the company now sets the standard of quality and service for the entire industry. 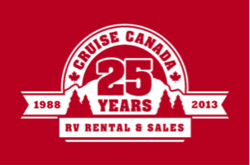 The strong business standards and unwavering commitments of Cruise Canada come from a history of family solidity.

Canada’s leader in RV rentals and sales, is excited to celebrate their 25th year in business. The landmark anniversary is March 1, 2013. The company has sprouted and grown from humble beginnings, and now stands proud as the uncontested leader of the RV rental industry in Canada.

In 1970, after serving as Hertz’s CEO and president for several years, Robert Smalley Senior began a company of his own. He called it American Land Cruisers. Bob Jr. and Randall, two of Robert’s sons, had both graduated from college and each began working with their father at ALC. The company’s inventory was comprised of twelve rental motorhomes, and slowly grew from there. They were able to make it through the hard-hitting energy crisis of 1974, as well as the recession of the early 80’s. They subsequently changed their name to Cruise America, and expanded into Canada eight years later and Cruise Canada was born.

Cruise Canada and the parent company Cruise America, enjoyed a great deal of success into the next millennium, as is now evidenced by the over 130 rental locations and 13 sales locations throughout Canada and the U.S. Their inventory has expanded from the first twelve rental motorhomes to the now over 4,000 top-of-the-line RVs. Cruise Canada and Cruise America offer their used motorhomes for sale to the public periodically to make room for new inventory, and have sold over 26,000 of them to very satisfied customers.

Cruise Canada offers their inventory of fully equipped, self-contained RV’s, as well as an extensive list of their locations, online, which enables the public to make their selection according to their needs. On the site there are informative videos, featuring the many accommodations and convenient amenities that come with each model.