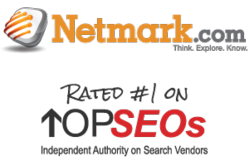 Idaho is an unlikely state to expect to find one of the fastest and highest rated internet marketing firms, yet Idaho Falls is the home to Netmark. Netmark is an internet marketing company focusing on search engine optimization, pay per click advertising, social media marketing, conversion rate optimization, and reputation management. Since Netmark’s founding in 2007 the company has steadily begun to grow from that of Chad Heath and Josh Dalton, to a company that employees over fifty different employees.

Topseos.com is an independent authority and source on ranking internet marketing companies. In March of 2013, Netmark was awarded the following:

Toptenreviews.com rated Netmark an 8.95/10. With these strong rankings, it is easy to consider Netmark reputable. Netmark also has an open client profile they are willing to share to build trust and establish credentials.

With the growth that Netmark has experienced, Netmark pushes the internet marketing field and looks forward to the future. Idaho seems like an unlikely place to find an award winning internet marketing company, but, as unlikely as it seems, it is not.