“God or No God – Can Science Answer the Question?” is the topic of physicist Louis Del Monte’s new four-part YouTube video series. Watch the video series to get real answers to one of the oldest questions in both science and philosophy. 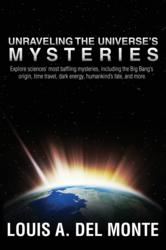 The question, “God or No God,” is likely one of the oldest questions ever tackled by science or philosophy. My objective is to determine if science is able to answer the question.

“God or No God?” will be addressed scientifically by physicist Louis Del Monte in his new four-part YouTube series. Del Monte is tackling one of science’s most controversial subjects. Part 1 of the series is available now, with Parts 2-4 to follow shortly.

The material that Del Monte covers is from his recently published book, “Unraveling the Universe’s Mysteries,” available in soft cover or e-book format on Amazon.com and BN.com (Barnes & Noble). In his book, Del Monte devotes an entire chapter to “How Does God Fit into the Equation?”

Del Monte’s book, "Unraveling the Universe’s Mysteries," is getting excellent reviews on Amazon and Barnes & Noble, both averaging almost 5 stars. Goodreads has also highly rated it 4.7 stars. A recent book review in the popular scientific blog universetoday.com, January 31, 2013, stated, “Readers will get something out of this book; it’s an interesting discussion of the mysterious aspects of our Universe.”

“The question, “God or No God,” is likely one of the oldest questions ever tackled by science or philosophy,” said Del Monte. “My objective is to determine if science is able to answer the question.”