Everson’s award-nominated novel, NIGHTWHERE, is available in print and ebook from Samhain Publishing 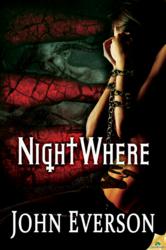 “Everyone at Samhain Publishing is extremely proud to have been able to work with John Everson on this terrific and daring novel,” explains D’Auria. “I knew as soon as I read NightWhere that this was something special."

International publisher Samhain Publishing® this week announced that author John Everson has been nominated for a 2012 Bram Stoker for Superior Achievement in a Novel. Everson’s novel, NIGHTWHERE, joins a list of only five novels in the Final Ballot for this year’s award. Winners will be announced at the 26th annual Bram Stoker Awards Banquet, held during the World Horror Convention in New Orleans on June 15, 2013.

According to Samhain Horror Executive Editor Don D’Auria, the nomination is well-deserved… and not entirely a surprise. “Everyone at Samhain Publishing is extremely proud to have been able to work with John Everson on this terrific and daring novel,” explains D’Auria. “Editing John's work is always a delight, but I knew as soon as I read NightWhere that this was something special.”

This is Everson’s second nomination—he also won a Bram Stoker for Superior Achievement in a First Novel, for his debut work, COVENANT. He began developing the ideas behind NIGHTWHERE shortly thereafter. “I first thought of the concept over ten years ago, when I was finishing writing my first novel,” Everson explains. “But the timing wasn’t right. I finally decided to take the plunge last year, and I wrote this for my new publisher, Samhain, and I'm glad I did. I'm really proud of how the book turned out, and reader response has been amazing—probably the best of anything I've written. So to have the book also recognized by your peers—it's a really great feeling!”

A resident of Naperville, Illinois, Everson will be attending the Bram Stoker Awards Weekend. Samhain Publishing, a sponsor for the awards dinner, will also be represented by D’Auria at the event.

To learn more about this title and all Samhain Horror books, and to order books at a special discounted rate, visit the publisher online at http://www.samhainhorror.com. To contact the author, email him at john@johneverson.com.

Launched in 2005 with a vision of bringing extraordinary fiction to compulsive readers, Samhain Publishing® is an international publisher of e-book and traditional print fiction, representing some of today’s brightest authors of romance and horror fiction. To learn why at Samhain “it’s all about the story…”, visit Samhain Publishing online at http://www.samhainpublishing.com.