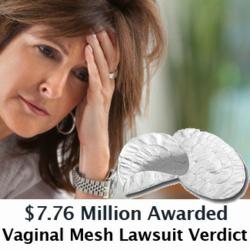 The New Jersey transvaginal mesh lawsuit is one of 1,800 pending against Johnson & Johnson and its Ethicon division in a multicounty litigation underway in Atlantic County Superior Court. During her own testimony, the Plaintiff in the mesh lawsuit described her life since receiving Ethicon’s Gynecare Prolift device as a “living hell.” Despite undergoing 18 corrective surgeries, the 47-year-old former nurse from South Dakota said she is unable to sit or stand for long periods of time without feeling pain. In urging the jury to award punitive damages, the Plaintiffs’ attorneys said Johnson & Johnson was a “big giant” and jurors must send a “loud message” to punish the company for its conduct, according to Bloomberg.

Transvaginal mesh devices used to treat pelvic organ prolapse and stress urinary incontinence have been the subject of growing safety concerns since October 2008, when the U.S. Food & Drug Administration (FDA) issued a Public Heath Notification advising it had received more than 1,000 complaints over a three year period relating to vaginal mesh products. In July 2011, the FDA issued another alert, noting that it had received a total of 2,864 additional reports of complications. The agency concluded that serious injuries associated with surgical mesh for transvaginal repair of pelvic organ prolapse, were “not rare,” and further advised that transvaginal prolapse repair with mesh “does not improve symptomatic results or quality of life over traditional non mesh repair.”
[fda.gov/MedicalDevices/Safety/AlertsandNotices/PublicHealthNotifications/ucm061976.htm]

Since then, thousands of women have filed lawsuits against the manufacturers of these devices. In addition to the consolidated proceeding underway in New Jersey Superior Court, litigations involving five federal pelvic mesh manufacturers are underway in the Southern District of West Virginia, including:

About Wright & Schulte LLC
Wright & Schulte LLC, a defective medical device law firm, is dedicated to the belief that America’s legal system should work for the people. Every day, the attorneys of Wright & Schulte LLC stand up for the rights of people who have been injured or wronged by defective drugs and their side effects, complications from defective medical devices, and unsafe consumer products, and fight tirelessly to ensure that even the world’s most powerful corporations take responsibility for their actions. If you’re looking for a law firm that will guarantee the aggressive and personal representation you deserve, please do not hesitate to contact Wright & Schulte LLC today. Free case evaluations are available through yourlegalhelp.com, or call 1-800-399-0795.