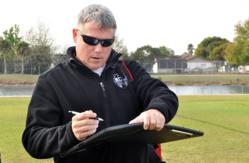 By utilizing our Kicking IndeX (KIX) Player Rating System, NCS provides an objective evaluation platform for student-athletes who want to showcase their capabilities to colleges and universities for recruiting purposes. Michael Husted

A second team All-Region Placekicker - Florida out of Woodham High School (FL), Eric Fritz signed and accepted an appointment to the United States Coast Guard Academy where he started and performed Placekicking and Kickoff duties.

After leaving the U. S. Coast Guard Coach Fritz earned two degrees in 1996 from the University of South Alabama (BSBA Operation Systems Management) and the Hogeschool van Arnhem en Nijmegen (The Netherlands), (BBA Certification - European Logistics & Distribution) and a Master’s in Public Administration in 2006 from Troy University.

Fritz has a unique experience as a player that kicked traditionally, teaches and coaches American Soccer Style, Punters and Deep Snappers and likes to crunch numbers for fun. Coach Fritz is dedicated to building positive work habits, character and integrity, which results in a positive coach/player learning environment all based with statistics and objective measurements.

Kicking coach Michael Husted, who created the NCS after kicking in the NFL for 9 years, says he is excited about and working with Eric Fritz on his NCS evaluation events in 2013 and beyond.

“NCS kicking camps are run by some of the best kicking coaches in the country,” says Husted. “Their goal, and the goal of NCS is to provide high quality instruction to high school kicking specialists around the country like the coaching provided by Eric Fritz of RealKickers.”

“By utilizing our Kicking IndeX (KIX) Player Rating System, NCS provides an objective evaluation platform for student-athletes who want to showcase their capabilities to colleges and universities for recruiting purposes,” says Husted.

Adding, "2012 shaped up to be the best year yet for the National Camp Series. After a strong 2011, and having introduced our Kicking IndeX (KIX) Player Rating System, we are positioned extremely well to leverage analytics to showcase our athletes, and to provide ‘objective high school kicking specialists statistics' to college and university coaches.”