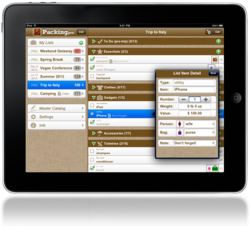 It's a great honor being a finalist again, in both competitions.

QuinnScape is proud to announce that its Packing Pro travel app is now a finalist for Best Travel App in both the 2013 Readers' Choice Awards, sponsored by About.com, and the Best App Ever Awards, sponsored by 148Apps. That means it's one of only five finalists (and 10 for Best App Ever), out of almost 40,000 travel apps, that have made it this far. In addition, this is the second consecutive year that Packing Pro has reached the finals in the Readers' Choice Awards, and the third year in a row for the Best App Ever competition.

Since its launch almost four years ago, Packing Pro has been highlighted on Apple's App Store several times. Currently, it can be found in the "10 Essentials" and "Plan Your Vacation" promotions. It was also featured in summer 2012 ("Plan Your Vacation"), winter 2011 ("Traveling Home" and "Staff Favorite") as well as in the summer 2009 "Travel Guide" promotion. It has often also placed high in the top 10 rankings, peaking at #1 for iPads and #2 for iPhones in the U.S. App Store's Travel section.

Packing Pro is a digital packing list that features an extensive, customizable catalog, several handy sample lists that can be used as templates, and unlimited, 100% customizable packing lists. A host of special functions include:

Besides the core features listed above (which are also present in the basic Packing (+TO DO!) app), Packing Pro also gives its users great iCloud auto-syncing support, complete control over the look and feel of the app (themes, layout, fonts, colors, textures), a double-sized Master Catalog with over 800 items and to-do tasks, an Expert packing list wizard that can "automajically" help you create a customized list, twice as many sample lists, Smart Search, and iTunes & email file sharing & out-of-app editing support.

Being a finalist in About.com Readers' Choice Awards two years in a row, and in 148Apps' Best App Ever Awards three years in a row, is a great honor for Packing Pro and QuinnScape. Maybe this year, it can walk away with a top prize! Cast your vote to help!

Pricing and Availability:
Packing Pro is a universal app (like two apps in one!) that is available for purchase worldwide on the iPhone & iPad App Store for only US$ 2.99, or the equivalent in local currency. The basic Packing (+TO DO!) sells for only US$ 0.99. App Store promo codes are also available upon request for press & bloggers around the world.