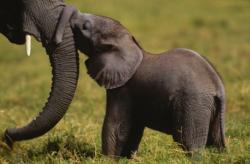 I applaud the Prime Minister for her courage and for listening to the more than 1.4 million people around the world who spoke up for elephants and demanded an end to Thailand’s ivory trade.

In her opening remarks at the UN Convention on International Trade in Endangered Species, Thailand’s Prime Minister, Yingluck Shinawatra, announced a commitment to end the ivory trade in the country. In response to this significant milestone, World Wildlife Fund (WWF) issued the following statement from President and CEO Carter Roberts:

“I applaud the Prime Minister for her courage and for listening to the more than 1.4 million people around the world who spoke up for elephants and demanded an end to Thailand’s ivory trade.

“Since the Prime Minister did not announce a detailed timeline, we must remain vigilant -- even during this two-week convention -- to push for timebound steps to ensure that this promise becomes a reality.

“This milestone was supported by a remarkable chorus of voices, including WWF Board Member Leonardo DiCaprio, to tell the story of how the illegal wildlife trade is robbing the world of elephants and stealing the wealth of African nations.

“But the fight to save iconic species doesn’t stop here.

“We hope, and expect, that this commitment will curb poaching of African elephants by closing a major global loophole. Americans and other tourists must continue to educate themselves on what not to buy while traveling so that they are not unknowingly contributing to this illicit industry.

“102 rhinos in South Africa have been killed already this year -- a rate that will surpass the record 668 rhinos lost to poaching there in 2012. Vietnam has been identified as the primary consumer country for illegal rhino horn from Africa, yet they have done little to stop illegal traffickers. It’s time for Vietnam to follow Thailand’s lead.

“We must stop wildlife crime if we want our children to inherit a world with elephants, rhinos, and tigers – the same creatures that captured their imagination and graced the pages of their favorite bedtime books.”