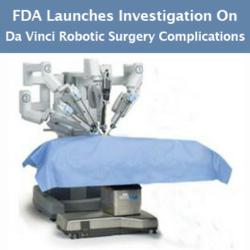 Wright & Schulte LLC, an experienced medical device law firm is currently investigating Da Vinci robotic surgery lawsuits, applauds news that federal regulators have launched a probe to determine if an increase in adverse events related to the Da Vinci Surgical System is a reflection of a real and growing problem. A spokesperson for the U.S. Food & Drug Administration (FDA) told The Wall Street Journal that the agency decided to survey physicians after noting an "increase in number of reports" of potential Da Vinci Robot complications to the agency.
[wsj.com/article/SB100014241278
87324662404578332712134965802.html]

For more information on filing a Da Vinci Robotic Surgery Complications lawsuit, or to arrange for a free legal consultation, please visit yourlegalhelp.com.

Marketed by Intuitive Surgical, the Da Vinci Robotic Surgical System is a robotic surgery system used in minimally invasive surgeries, including hysterectomies, prostate removals, heart surgeries, gall bladder removals and bariatric surgery. Proponents of the robot claim it offers patients less bleeding and scarring, as well as shorter recovery times compared to traditional procedures. According to a report from Bloomberg News, Da Vinci Robots, which cost around $1.5 million each, were used last year in almost 500,000 procedures. However, according to a recent StreetInsider.com report, Intuitive Surgical has been named a defendant in nine Da Vinci Surgery Robot lawsuits filed on behalf of people who suffered serious complications, allegedly due to defects in the device.
[streetinsider.com/Analyst+Comments/Bloom+Could+Come+Off+Intuitive+Surgicals+%28ISRG%29+Rose+as+Lawsuits+Fly+-+Citron/7960336

According to The Wall Street Journal, the FDA survey is asking physicians to provide information about adverse events related to the Da Vinci Surgical System and their training on the device. The agency is seeking to determine whether the increase in Da Vinci Robot complication reports “reflects a real and growing problem, or simply an increase in physicians participating in the reporting program.”

News of the FDA probe comes on the heels of a study published in the Journal of the American Medical Association (JAMA) that questioned the overall value of robotic assisted hysterectomy. The study, which involved data 264,758 women who had either laparoscopic or robotically-assisted hysterectomy between 2007 and 2010, found that complication rates for the two procedures were about even. However, robotic hysterectomy procedures cost an average of $8,868/procedure, compared with $6,679 for laparoscopic surgery. “Our study indicates that, while robotic assistance was associated with increased use of minimally invasive surgery for hysterectomy, when compared with laparoscopic hysterectomy, the robotic procedure offers little short-term benefit and is accompanied by significantly higher costs,” the authors of the study concluded. [jama.jamanetwork.com/article.aspx?articleid=1653522]

About Wright & Schulte LLC
Wright & Schulte LLC, an experienced personal injury firm, is dedicated to the belief that America’s legal system should work for the people. Every day, the dedicated attorneys of Wright Schulte LLC stand up for the rights of people who have been injured or wronged. If you’re looking for a law firm that will guarantee the aggressive and personal representation you deserve, please do not hesitate to contact Wright & Schulte LLC today. Free Da Vinci robotic surgery complications lawsuit evaluations are available through yourlegalhelp.com, or call 1-800-399-0795