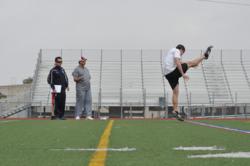 I am very eager for this year's Pro Camp at Florida Atlantic University. This is a first class facility that will allow us to effective coach and evaluate specialists that have the dream of playing in the NFL. Michael Husted

As the 2013 football season starts to ramp up, retired NFL kicker Michael Husted is making final preparations for the 2013 Husted Kicking Pro Camp to be held in Boca Raton, FL, from March 9-14, 2013.

"I am very eager for this year's Pro Camp at Florida Atlantic University,” says kicking coach Husted. “This is a first class facility that will allow us to effective coach and evaluate specialists that have the dream of playing in the NFL.”

Husted, who kicked in the NFL for 9 years, says each year, the talent competing at the Pro Camp, just keeps getting better.

“We have a solid group of kickers, punters and long snappers, who we feel are NFL prospects, attending the camp,” says Husted. “With this being our 10th year running the Pro Camp, we believe that this year's talent pool will be the strongest yet.”

Husted started the camp with retired NFL punter Louie Aguiar. However Aguiar has recently been hired as an Assistant Special Teams Coach with the New York Jets and will not be part of this years’ camp.

Husted says the Husted Kicking Pro Camp is the place for those free agent kicking specialists, not invited to the NFL Combine, to be seen by NFL scouts and pro staff. He says it is also provides an opportunity for those kicking specialists still in college, the chance to receive instruction and guidance from some of the best coaches in the nation.