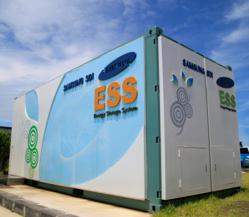 The Center for the Commercialization of Electric Technologies has chosen Samsung SDI and Xtreme Power to install a 1 MW/1 MWh lithium ion based battery energy storage system at the Reese Technology Center in Lubbock, Texas. The $27 million project will be part of a smart grid demonstration project jointly funded by CCET partners and the U.S. Department of Energy as part of the American Recovery and Reinvestment Act of 2009.

The demonstration project, called Discovery Across Texas, Technology Solutions for Wind Integration in ERCOT, will be owned by South Plains Electric Co-op (SPEC).

The battery energy storage system will be connected to SPEC’s distribution grid at the Reese Technology Center as part of an ongoing wind technology program managed by GroupNIRE and Texas Tech University. Potential uses for the system include mitigating intermittent fluctuations of a number of nearby wind turbines, regulating the distribution bus voltage, serving as spinning reserve and providing frequency support during the loss of generation.

The project marks the first order for the newly-formed alliance between Samsung SDI, an affiliate of Samsung Group, and Xtreme Power, a privately held company based in Austin, Texas.