After introducing Hinduism, Yoga, and interfaith awareness to the world, Swami Vivekananda’s spiritual teachings have reached millions, and the Kickstarter project’s $15,000 goal will bring his complete works to audio. 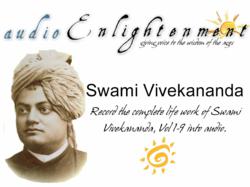 When Swami Vivekananda brought the philosophical portion of the ancient scriptures of India known as Vedanta, to America in 1893, westerners began a philosophical and religious journey that continues and grows today. From the harmony of all religions to the concept of “realizing God,” Swami Vivekananda is known worldwide as a major force in the revival of Hinduism in India and a major contributor to the notion of nationalism in colonial India. During his lifetime, he lectured and wrote prodigiously. Now, a new Kickstarter campaign is underway to raise the funds to create audio recordings of the complete works of Swami Vivekananda Volumes 1-9.

The project is being undertaken by Audio Enlightenment, which brings some of the greatest spiritual works of the last 400 years to thousands via online audio streaming. The Kickstarter platform is the world renowned means by which individuals, groups and organizations gain their funding from public donations for worthwhile creative projects.

“There are currently over 350,000 searches a month for the works of Swami Vivekananda, which is just an inkling of those seeking his timeless words of philosophy and religion,” said Audio Enlightenment CEO Barry Peterson. “It seemed only logical to bring our need for funding to the very people around the world that will benefit from these deeply spiritual and life changing words in audio form.”

The ever-growing audio format catalog maintained by Audio Enlightenment includes the words and teachings of hundreds of the world’s greatest philosophers and spiritual teachers. Among them are the writings of Samael Aun Weor whose work discloses the wisdom of the Eastern understanding of the existence of mankind.

Audio Enlightenment hopes to begin the massive work of adding the nine volumes of the complete works of Swami Vivekananda to their website and then to audio as soon as they have the funding. Bringing the works to audio is a massive undertaking and the Kickstarter project has a $15,000 goal with donations accepted until the funding effort ends on March 28, 2013. The project will only be funded if at least $15,000 is pledged by that date.

While there is a minimum $1 pledge, pledges of $25, $50, $100 or $250 receive a free six-month, one-year, two-year or five-year Audio Enlightenment membership respectively. “Our mission is to add more of mankind’s spiritual classics to our site so that we can share them with our growing membership around the world,” said Peterson. “We thank everyone in advance for their pledges to bring the great works of Swami Vivekananda to the many thousands of people around the world seeking that healing wisdom.” For more information and to make a donation, please visit http://www.kickstarter.com/projects/2129229374/swami-vivekananda-complete-works-in-audio

Audio Enlightenment provides online audio streaming of some of the most significant self-help and spiritual classics over the last 400 years that are available nowhere else on the Internet. They archive thousands of lectures and hundreds of spiritual and self-help books via audio. The growing lists of some of the greatest spiritual teachings are all recorded in the Audio Enlightenment studios for their growing worldwide membership.