Formula Renault NEC competitor Raoul Owens announces that he has switched teams ahead of his maiden season in the category, and will now contest the 2013 campaign with British squad Mark Burdett Motorsport. 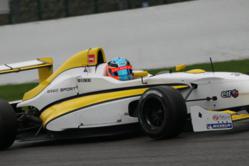 Formula Renault 2.0 Northern European Cup (NEC) challenger Raoul Owens has switched teams ahead of his maiden season in the category it is announced today, Friday, 1st March, and will now contest the 2013 campaign with British squad Mark Burdett Motorsport.

Having originally confirmed his graduation from Protyre Formula Renault into the ultra-competitive NEC championship back in November after signing for Manor MP Motorsport, the 18-year-old Cape Town-domiciled racer has moved teams with just over a month remaining until the opening round.

With Manor MP focusing its efforts on its newly-acquired GP2 Series entry, coupled with squads in AUTO GP and Eurocup Formula Renault 2.0, a decision to withdraw from Formula Renault 2.0 NEC threatened to leave Raoul with limited options. An opportunity to join Colombian driver Andres Méndez at Mark Burdett Motorsport, though, has secured the Briton an equally competitive seat.

“We were quite surprised our plans had to change but we’re really looking forward to racing with Mark’s team, they had a lot of success last year in NEC and have a really great reputation for helping develop young drivers,” said the Bright Spark Ventures-backed racer.

“The team has a lot of experience in Formula Renault in the UK, and now in Europe as well, so we’re confident of a really strong season. It’ll be an incredibly tough challenge but we’re ready and I know Mark Burdett Motorsport will give me a very competitive car.”

Raoul, who originally hails from Pembury in Kent, is determined to make an impact during his first year at European level in single-seaters. During his formative career in karting, the teenager won the 2007 Rotax Max Regional Championship in South Africa before graduating onto the world stage. He then made his car racing debut in 2011 in the UK-based Protyre Formula Renault BARC series.

Mark Burdett Motorsport, which made its first appearance in Formula Renault 2.0 NEC last year, was established in 1994 and immediately enjoyed championship success in the realms of Formula First before branching out into Formula Renault UK and Formula BMW.

Spearheaded by its eponymous owner, the engineering side of the operation is led by the vastly experienced Andy Miller – formerly of Stewart Grand Prix and Jaguar Racing in Formula One – with the addition of expert driver coaching from multiple A1GP race winner and 2002 British Formula 3 Champion Robbie Kerr.

“I’m very pleased Raoul has joined us,” commented Burdett. “We’ve followed him for the last couple of years in [Formula Renault] BARC and we saw him at Spa last year when he had a one-off outing in the NEC, he did a good job there. Raoul is very focused on doing well, he’s eager to learn and we’ve got everything in place with Robbie [Kerr] and Andy [Miller] to help him develop fully as a driver.”

Following official pre-season testing later this month, the opening weekend of the 2013 Formula Renault 2.0 NEC season will take place on 6th/7th April at Hockenheim in Germany.