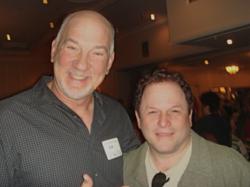 I always look forward to Jason’s poker tournament because the funds raised facilitate the great work of the weSPARK Cancer Support Center, which provides a very special healing environment for cancer patients.

Always an exciting day of poker, food, prizes and lots of laughs, The Jason Alexander Texas Hold’em Poker Tournament was held at the Sportsman’s Lodge on March 3, 2013. Organizers of the event include poker chairs Arthur Toretzky and Anita Rich, along with Honoree Committee Members Missy and John Halperin and Linda Meyers. Schiller is an expert poker player and finished 8th out of 300 players, all of who were competing to raise maximum funds for weSPARK.

“I always look forward to Jason’s poker tournament because the funds raised facilitate the great work of the weSPARK Cancer Support Center, which provides a very special healing environment that truly enhances the quality of life for cancer patients and their families,” said Schiller. “The center is a ray of hope for those making the difficult journey to battle cancer and every dollar raised is critical to their work.”

A humanitarian dedicated to making a difference in the lives of the less fortunate, Schiller has become well known for his philanthropic efforts throughout Los Angeles County and the nation, using his talents to be a renowned advocate for the health and welfare of families and children in need.

Schiller has worked tirelessly to support a variety of organizations including Harvest Home, a nonprofit organization that provides assistance to homeless, expecting mothers. Schiller’s other philanthropic efforts include the ninth annual “All-In” for Kids Celebrity Poker Tournament, which benefited The Alliance for Children’s Rights and Brad Garrett’s annual “All-In For All Good” Celebrity Poker Tournament, which raises funds for Maximum Hope Foundation. Schiller is the co-founder of the Devon Stern/UCP Golf Tournament, a successful annual fundraising event that has generated over $300,000 for children with cerebral palsy.

Rob Schiller, Emmy-award winning American film and television director, producer is also president of R&B JAAMZS, Inc. Schiller has directed and produced over 250 episodes of sitcoms, including the brand new Nick at Nite family comedy “Wendell & Vinnie”, the CBS hit comedy, “The King of Queens,” “Two and a Half Men,” and “Til Death.” His latest motion picture, “And They're Off,” starring Sean Astin and Kevin Nealon, follows a failed horse trainer who desperately wants to be back in the winner's circle. In addition, Schiller recently directed Charlie Sheen’s new show, “Anger Management.” For more information, visit http://www.robschiller.com.

And They're OffRob Schiller's latest motion picture is “And They're Off,” starring Sean Astin and Kevin Nealon, about a failed horse trainer who desperately wants to be back in the winner's circle.