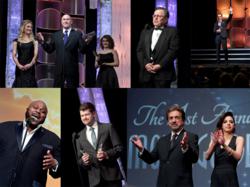 You can change the media by changing the channel to Hallmark Movie Channel on March 6.

Joe Mantegna of TV’s “Criminal Minds” and his daughter, Gia, will host the Faith & Values Awards, which will also feature appearances by some of the most renowned Hollywood stars and Entertainment Industry leaders.

“You can change the media by changing the channel to Hallmark Movie Channel on March 6,” said Dr. Ted Baehr, founder and spokesperson for the Annual Movieguide® Awards Gala.

Movieguide® is a family guide to movies and entertainment.

Movieguide® (http://www.movieguide.org), and its sister organization, the Christian Film & Television Commission® (CFTVC), is an international non-profit ministry dedicated to “redeeming the values of the entertainment industry by influencing industry executives and by informing and equipping the public about the influence of the entertainment media”.

To help you pick the good from the bad, please visit us daily at http://www.movieguide.org.

For more information, or to arrange an interview with Dr. Ted Baehr, founder of CFTVC and author of The Culture-Wise Family, So You Want to be in Pictures, and many other books, please call 1-888-248-6689.

To unsubscribe from MOVIEGUIDE® press release emailings, send an email request to: unsubscribe(at)movieguide(dot)org.