Vessel will sail Luxury Adventures in Mexico, then Central America. 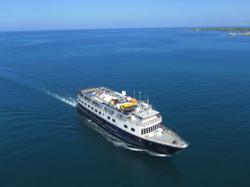 “The Safari Voyager fits in perfectly with our upscale adventure fleet,” said Dan Blanchard, Un-Cruise Adventures’ principal and CEO. “The vessel is outfitted for warm weather sailing and will be ideal for tropical adventures in Central America.”

Un-Cruise Adventures announced today its acquisition of the 64-guest Safari Voyager for its yacht fleet with plans to offer Luxury Adventures year-round in Mexico’s Sea of Cortés beginning in November 2013. In winter 2015, the vessel will transition to sailing year-round in Central America. Previously named Sea Voyager, the vessel is currently in Colombia undergoing renovation.

Details for Central America deployment such as itineraries, included shore programs, fares and dates of operation will be available spring 2013.

The Safari Voyager will replace the line’s 86-guest Safari Endeavour in Mexico’s Sea of Cortés beginning in November 2013 and offer four different itineraries available year-round from homeports of La Paz, Cabo and Guaymas. Current plans have the Safari Voyager transitioning from Mexico to year-round itineraries in Central America beginning in December 2015. The vessel will spend winters exploring Costa Rica, summers in Belize and offer transits of the Panama Canal in spring and fall. The 86-guest Safari Endeavour will then return to sailing in the Sea of Cortés during the winter.

“The Safari Voyager fits in perfectly with our upscale adventure fleet,” said Dan Blanchard, Un-Cruise Adventures’ principal and CEO. “The vessel is outfitted for warm weather sailing and will be ideal for tropical adventures in Central America.”

The Safari Voyager will have 33 outside view staterooms including four suites and two single staterooms for a total guest capacity of 64. During the renovation, a new Library will be created on the Cabin Deck with eight floor to ceiling windows, plush furniture, and nautical décor in tribute to New World explorers. The very top deck of the vessel—the Sun Deck—will be transformed into a new al fresco public space with fitness equipment and lounge chairs. A massage room will also be added. A swim step platform on the stern of the boat is a convenient place for guests to access the water for included adventure activities such as snorkeling, skiff excursions, kayaking and stand up paddle boarding.

A spacious view Lounge features 20 floor to ceiling windows, a full-service bar, four glass doors with two as doubles opening onto an outside deck—a design element created for air conditioning when needed or flung open to deck. Comfortable chairs and tables outside extend the Lounge onto the deck. A separate Dining Room on the Main Deck accommodates all guests for meals at one seating in an ornate setting with rich, dark wood treatments. A nautical and tropical design ties décor together throughout public spaces.

A Luxury Adventure includes all meals, adventure activities, massage, premium wine/beer/spirits, transfers and port fees and taxes. To book an Un-Cruise Adventure or to request additional information, contact your travel agent or the company directly at 888-862-8881 or email sales(at)un-cruise(dot)com.

Editor’s note: Visit the Media Center for press materials and the image gallery for photos, or contact Sarah Scoltock at sarahs(at)un-cruise(dot)com.