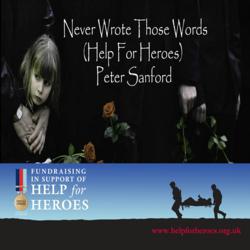 The songwriter and musician Peter Sanford, disabled in an accident in 2009, releases a tribute single to the servicemen that inspired him during his rehabilitation and through the stories of returning heroes featured in the BBC series Wounded aired shortly after his accident. Peter says: ‘As a disabled person I identify strongly with the problems that face us all coming to terms with how coldly this particular government view vulnerable individuals and even more so for injured servicemen and their families. It has been my ambition to donate music to H4H once my injuries had healed enough to write and record something as a tribute to their work with these amazing people”

The single “Never Wrote Those Words – Help For Heroes” is released on iTunes and Amazon on 1st April 2013 all funds to be donated to the UK charity HELP FOR HEROES who raise funds for wounded servicemen arriving back to the UK from conflicts abroad. The single “Never Wrote Those Words – Help For Heroes” and the proceeds that come from that release are a mark of respect for those servicemen whose courage and determination are a lesson to all of us. With the ambitious pre-release target of 1 million online views likely to be achieved the song has been well received by servicemen and their families as well as a very supportive public.

With the current governments drive to raise money by hitting the disabled, wounded and their families with savage benefit cuts it’s a good time to raise awareness of these issues and how badly the disabled community and armed forces feel about how they are being treated.