Eric Sommer gets down to work in St. Louis, MO at 'Off Broadway' on Tuesday, March 19, 8pm. This "Acoustic Guitar Super Hero" returns to St. Louis and plays 'Off Broadway' with new material, new disc. 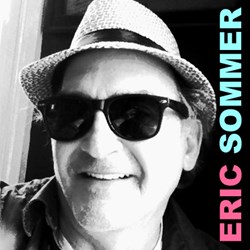 Eric Sommer and The Solar Flares started last summer in South Carolina, recorded in Pittsburg in the fall, released their disc shortly after that and their new record 'Rainy Day Karma' is now beginning to attract attention. A lot of attention.

It should surprise no one.

Mr. Sommer has been on the road almost continuously for quite a few years, playing every cracker box bar, music hall, street corner and garage in the US and Europe. And this new crop of songs brings him and his sound to a much broader audience primarily because of the raw beauty of the material, the empathy these songs express and the 427,000 miles logged on his white, slightly ragged, Chevrolet.

As a solo artist, Eric has a lot of credibility. A whole lot: at one time or another he has toured with, shared the stage with, and/or collaborated extensively with everyone from Leon Redbone and John Hammond Jr. to Nick Lowe, Wreckless Eric, Bram Tschaikovsky and Jerry Douglas. And he's played in front of, beside, behind or above - or mixed drinks for - David Bromberg, John Mayall, Sarah Watkins, Mission of Burma, Gang of Four, The Dead Kennedy's and a hundred other edgy, fringe and outer galactic artists.

He has influenced more players and songwriters with his style and syntax than he'd care to admit, and there's always a crowd around him in Nashville, Little Rock, Boston or Chicago.

His brand of Pop Americana mixes the best of what guitar skills are all about - slide, open-tunings, finger-style, string-bending and lap-slap - with what songwriting has always strived to be. These are songs whose lyrics are generally filled with highly evocative imagery; imagery of the kind that makes a song roll around your head, down the drive way, jump the curb, hitchhike to Florida, relax on the beach, throw back a beer and tequila lunch in time to grab the IRT into Brooklyn.

Watching Eric pull this off live, and produce his kind of sound that is at once very distinctive and hair-raising. This is a sight worth seeing and is first on a lot of bucket lists.

Often compared to Elvis Costello, Joe Jackson and Steve Howe, Eric has built a solid concert and club track record as a solo artist. Besides being one of the finest American guitar players on the road today, Eric combines great songwriting with musical inventiveness to deliver one of the best live shows on the circuit.

Current Tour plans for latter half of March include:

For music samples please visit CDBaby or Eric Sommer online for additional schedules or contact him at eric(at)ericsommer(dot)com or call 202-255-1995. Additionally, you can find Eric Sommer on Facebook, too.

ERIC SOMMER LIVE at The Bus Stop Music CafeOne of the last of the great music halls...