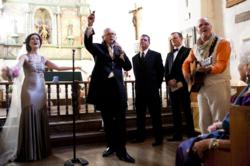 “It was my intention to savor every single moment,” said Robbi, “and hire artists for every aspect of our celebration. Our 6 events showcased performance, culinary and visual arts, requiring everyone to awaken their creative passions in joy and love!"

The over-the-top fantasy weddings many little girls dream of seldom come to pass. But portrait artist Robbi Firestone and her fiancé, businessman David Lamb, saw no need to discount fantasy when intertwining their destinies. The result was an event that combined not only those destinies but their names as well: the "FireLamb" Wedding.

The reality of the fantasy began with location: Santa Fe, New Mexico, a 400-year old city steeped in history, romance, and most important to the artist and her fiancé, art. Robbi and David had visited Santa Fe and according to Robbi, they “fell in love with the place.”

“Destination wedding are all about creating memorable experiences, as well as having an amazing location,” says Robbi. “I wanted every venue, for every aspect of the wedding, to be so stunning that we didn’t have to decorate it.” And thanks to Santa Fe’s revered beauty and cultural prominence, that wasn’t hard. The couple secured a dreamy home base for the wedding party, guests and the reception: The Inn of the Five Graces in Santa Fe’s historic center.

On Saturday, in lieu of a traditional bridal shower, acclaimed Santa Fe mezzo-soprano Deborah Domanski hosted a no-gifts “Love the Love” party. The bride and her guests shared stories, songs, writings, and images representing their ideas of divine love.

Sunday, bride and groom hosted a combined bachelor/bachelorette party at the historic landmark Pink Adobe restaurant. The highlight: a highly-entertaining burlesque performance that did double duty as a Father’s Day present for the bride’s father.

The Tuesday wedding took place in the iconic adobe San Miguel Chapel, the oldest church in the United States. Robbi was escorted down the aisle by her father, retired Marine Master Sergeant Robert Oppermann. During the ceremony, led by a friend, the Reverend Charles Hall (Genesis Global Spiritual Center, Burien WA), the bride and groom read poetry and letters aloud as well as sang to one another. David’s mother, Isabelle (former Grays Harbor Port Commissioner), stood up and gave her blessings to the sacred union.

120 guests from all over the world packed the chapel. Robbi was radiant in a full-length, form-skimming, champagne toned Badgley Mischka Couture dress with intricate pewter beadwork. The groom wore a 19th century tuxedo. In lieu of bouquets, the bridesmaids wore wrist corsages composed of century-old lace, designed by Tacoma artist Nanette Colby and Marissa’s Flowers of Santa Fe.

Music played a significant role in the ceremony; Metropolitan Opera's Deborah Domanski sang, and the bride and groom serenaded their ceremony guests. David surprised Robbi with a special guest appearance by Jamie Lula, who performed “Perfect,” one of the couple’s favorite songs.

The reception was held in the lush courtyard of the Inn of the Five Graces. Guests enjoyed a range of locally-inspired hors d’oeuvres, hot and cold tapas, and sweets from Marja Custom Catering. Memorable dishes included: Spanish ham croquettes and yellow tomato gazpacho, Castilian-roasted lamb and grilled mini chorizos, and grilled asparagus, peas, and tomatoes stuffed with tuna, and olives and capers. Desserts included handmade chocolates and cherry empanaditas.

Passionate philanthropists, the couple requested gifts be given to the guests’ charities of choice.

Robbi and David honeymooned at the luxury resort Amangiri, in southern Utah.

(Their "first"/unofficial wedding was performed by a Maasai Shaman in Tanzania at the Ngorongoro Crater Lodge in Tanzania, with 250 Maasai villagers bearing torches and shooing away Cape Buffalo.)

Grammy winner Bluesman KebMo (Nashville) jams with virtuoso violinist Geoffrey Castle (Seattle) and Lead singer Daniel Blue from Motopony during the FireLamb wedding reception as a gift to the couple.The couple closed the street for a dancing in the street reception.