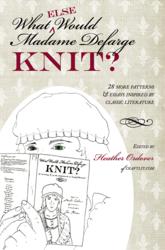 What (else) Would Madame Defarge Knit?

It's nice to know that we can release a quality book while reducing our carbon footprint by staying with North American printers.

Heather Ordover, writer and host of the CraftLit podcast, and Shannon Okey, of Cooperative Press and Knitgrrl, have teamed up again for their second book in Ordover's series, What (else) Would Madame Defarge Knit?—28 more patterns and essays inspired by classic literature. The book combines stunning knitting patterns with thought-provoking essays and woodcut-style artwork, all based on the great characters of literature.

The book's release at the end of this month heralds a major step for the two entrepreneurs who brought it to life. "I'm particularly proud," Ordover said, "to be able to build upon the revolutionary publishing model we began with the first book—paying designers a royalty instead of a flat fee, and printing a craft-based book in the US rather than China—but this time with the addition of color photography in the print copy as well as online." Okey adds, "It's also nice to know that we can release a quality book while reducing our carbon footprint by staying with the North American printers we use."

The book employs the Internet as a vital content-sharing tool. While the book is available in print, purchasers are encouraged to bundle print with a digital copy of the book at checkout. The digital version contains live links to websites with unique and regularly updated content unavailable in the printed book. This means that instead of a clumsy glossary or pages of step-by-step instructional photos, Okey and Ordover are able take readers directly to video tutorials, online stores for specialty items, and fun recipes related to the characters that inspired the patterns. Readers of the print copy can easily type in a brief URL and find their way to a webpage containing the book's links, organized by page number. Readers simply click the links and are taken directly to the helpful sites.

Under a traditional publishing contract, knitwear designers earn a small fee for their pattern. In some cases, they may only earn a copy of the book to which they contributed. The Defarge approach—giving each designer a share in the success of the book—may be unusual in the craft-publishing world, but as Okey says, "This is exactly the model Cooperative Press has been working toward." She adds, “It's called Cooperative Press for a reason."

Ordover knew each of her writers and designers in the Defarge series came with a unique group of blog readers or podcast listeners—a distinct group to whom the book could be marketed. Because each contributor is a shareholder in the project, each has a real incentive to help sell the book: the more copies anyone promotes, the more money everybody makes.

While this plan may not be news in the world at large, it has definitely been revolutionary in the world of craft publishing.

Despite reliance on the Internet, Okey and Ordover haven't turned their back on traditional publishing. Cooperative Press has established relationships with both mainstream and specialty distributors. Along with those traditional routes, the book also relies on Ravelry—aka "Facebook for knitters"—which has over three million members worldwide.

Yes, knitters have their own social network. While some may think of knitting patterns as Granny's domain (e.g., http://freakonomics.blogs.nytimes.com/2007/01/19/bank-cracks-down-on-wily-yarn-merchant/), designers who sell their patterns on Ravelry's digital sales platform have earned well over $2 million since the site opened.

To help spread the word about Madame Defarge and her growing revolution, Okey and Ordover are planning a series of Knit-a-Longs, individual pattern sales, and more volumes—the next based on Shakespeare, Chaucer, and Sherlock Holmes characters.

The lesson seems clear: Never underestimate the power of a few crafty people with pointy sticks… and a good broadband connection.

In 2009, Stitchgrrl LLC (a limited liability company owned by Shannon Okey) completed its acquisition of the publisher formerly known as anezka media, and changed its name to Cooperative Press to reflect the relationships we have developed with authors working on books. We work together to put out the best quality books we can, and share in the proceeds accordingly. Stitchgrrl LLC also owns Knitgrrl Studio, an educational facility and online store in Lakewood, Ohio that shares space with Cooperative Press’ publishing operations.