A Concord, Mass., native reminisces about his adventures sailing in the Atlantic Ocean in this entertaining new book released by Dog Ear Publishing. 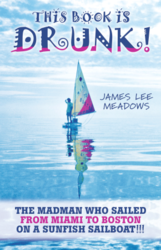 Dog Ear Publishing releases “This Book Is Drunk: The Madman Who Sailed from Miami to Boston on a Sunfish Sailboat” by James Lee Meadows.

Members of the Woodstock generation and those who remember the summer of love can relate to the fun-loving James.

A series of small jaunts around Cape Cod one summer, as well as a few longer jaunts, whets James Lee Meadows’ appetite for spontaneous sailing and adventure. His spontaneity comes into play again a few years later when he botches a run for selectman in his hometown of Concord against a prisoner from Concord Reformatory serving time for grand theft. This new memoir details what happens to the drinking, pot-smoking party man when his short-lived political career implodes and he embarks on an unforgettable aquatic adventure.

“This Book Is Drunk: The Madman Who Sailed from Miami to Boston on a Sunfish Sailboat” follows the author’s trip from cajoling the company that made Sunfish to let him use a boat to the cast of colorful characters he met. James sets sail from Miami Beach on an auspicious day – April 1, 1977 – and spends more than 100 days cruising along the East Coast, partying for days at a time with new friends, eventually joining longtime friend Jeremy, a photographer, in Atlantic City, before continuing to Boston. Members of the Woodstock generation and those who remember the summer of love can relate to the fun-loving James, who takes nothing seriously even when dunked in the ocean by giant waves. He survives on his charm, meager resources and the kindness of strangers awestruck by the letters on his boat reading “MIAMI TO BOSTON EXPRESS.”

Author James Lee Meadows, a gifted musician since his childhood in Concord, Mass., played lead guitar in a high school rock band and professionally while attending Shaw Prep. He graduated from Bryan Junior College with a commercial pilot’s license but turned to music again, releasing an unsuccessful album. He spent the next few years on the road, traveling across the country, writing manuscripts and performing. During a campaign for selectman in Concord, he planned a crazy adventure – sailing in a Sunfish from Miami to Boston. A few years later, he and a friend sailed from New Orleans to Maine on Phantom sailboats. He eventually moved to Florida and worked as an electrician for two decades, eventually deciding to chronicle his sailing trip of a lifetime.
----------
For additional information, please visit http://www.jamesleemeadows.com.