Independent filmmakers Christo Brock and Grant Barbeito have eschewed the bright lights and big dollars of studios and corporate investors to finish their movie about the teenager’s rise from swimming phenom to five-time Olympic medalist. 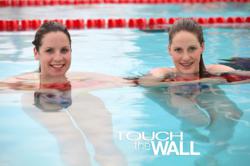 "Touch the Wall," chronicles the journey of five-time Olympic medalist Missy Franklin and USA teammate Kara Lynn Joyce from the pools of Colorado to the 2012 London Olympics.

The film-distribution paradigm is shifting, and filmmakers need to be more creative. Going straight to Kickstarter is a way to reach your audience directly and have them become part of the creative process. It’s a new way of making and distributing films.

At the 2012 London Olympics, then 17-year-old Missy Franklin turned in one of the most breathtaking performances in the history of the games, earning four individual gold medals and helping push her 4x100 relay team to bronze by swimming the fastest lead-off leg of the event that day. Now, independent filmmakers Christo Brock and Grant Barbeito want to share with the world the heartache, sacrifice, love, support and discipline it took to get her there.

Starting two years before her performance in London, “Touch the Wall” compresses over 400 hours of footage of the young Missy and five-time silver medalist Kara Lynn Joyce into a compelling documentary. The movie takes a hard look at the often arduous path the two took to get to swimming’s biggest stage, as they train under the tutelage of the unconventional and passionate Todd Schmitz, who coached Franklin since she was six years old.

It is a rare glimpse at the story behind the story of what it takes to become a champion. Brock and Barbeito followed Franklin everywhere, from her home to school, to untold practices and meets and eventually to London. Their journey is not yet done. To bring the story to the screen, Brock and Barbeito still need a little help.

Passing up on corporate sponsorships and studio involvement in the spirit of Franklin, who turned down many lucrative sponsorship offers to remain eligible to compete in college, the duo has turned to crowdfunding website Kickstarter (http://www.kickstarter.com/projects/685581697/touch-the-wall) to raise the $110,000 it will take to get the movie through post-production and take the first step toward presenting the film to the public this summer.

“Sourcing funds through Kickstarter allows us to remain truly independent,” said Brock of the unusual move. “We don’t need to answer to a sponsor or a studio who wants to exploit the story for their own purposes.”

Barbeito added that Kickstarter also helps with distribution. “The film-distribution paradigm is shifting, and filmmakers need to be more creative. Going straight to Kickstarter is a way to reach your audience directly and have them become part of the creative process. It’s a new way of making and distributing films.”

There is some support for Barbeito’s claim. “Inocente,” the first movie fully funded by Kickstarter, recently won an Oscar for documentary short subject. That movie raised $52,527 from 294 backers on the website to make the story of a 15-year-old undocumented homeless girl in California who refuses to give up her dream of being an artist.

Through nine days, the Kickstarter campaign for “Touch the Wall” has raised over $12,000 but has a long way to go to reach the goal of $110,000 before it ends on April 23. To get the word out, Brock and Barbeito have taken to social media, initiated a call for volunteers and are telling their story to just about anyone who will listen.

It’s been a tough climb but something the two could not have even imagined when they stumbled by chance into the project in 2010. Back then the two filmmakers were shooting another project about wine.

“Brock told me his friend Dick had a daughter who was a swimmer, and that she was pretty good,” recalled Barbeito. “I was skeptical at first, telling him, ‘I’m sure your friend loves his daughter, and that’s she’s probably pretty good, but I’m not sure that’s enough for a film.’ It wasn’t until we flew to Colorado and met Dick, DA (her mom), Missy and her coach, Todd Schmitz, that I knew we had a film, and a pretty special one at that,” Barbeito said.

The story gained depth and interest when fellow swimmer Kara joined the team. “Then, instead of just profiling one swimmer, we had a contrast in types,” Barbeito added.

For Brock and Barbeito, the goal is not gold but $110,000 to help bring their documentary, “Touch the Wall,” to the screen.