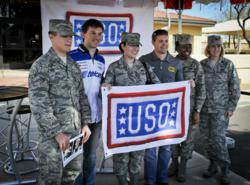 This is a busy time of year, but when I learned about the opportunity to volunteer with the USO again and visit troops in Arizona, I jumped at it," said Stenhouse Jr. "I had such a great experience .....

ARLINGTON, VA. (Mar. 7, 2013) – NASCAR teamed up once again with the USO, donating 600 tickets to troops and their families, and sending two of today’s youngest and most talented drivers on a morale-boosting USO visit to Luke Air Force Base on Feb. 28. Two-time NASCAR Nationwide Series champion and current NASCAR Sprint Cup Series driver Ricky Stenhouse Jr. and NASCAR rising star Daniel Suárez took a break from the race track and spent quality time with Arizona-based troops and their families prior to their races at Phoenix International Raceway (PIR) last weekend. ***Link to photos below***

“This is a busy time of year, but when I learned about the opportunity to volunteer with the USO again and visit troops in Arizona, I jumped at it. I had such a great experience over the winter in Kuwait and Germany; there is nothing like shaking the hands of our men and women in uniform, and saying ‘thank you’ - whether you are here in the U.S., the Middle East or Europe. It is because of them that I was able to race in the Daytona 500 and that I get to live out my dream every day.”

"My first USO visit was such an awesome experience. The outpouring of appreciation of both the USO staff and military families was amazing and something I will not forget. I look forward to working with them again in the future.”

The USO lifts the spirits of America¹s troops and their families millions of times each year at hundreds of places worldwide. We provide a touch of home through centers at airports and military bases in the U.S. and abroad, top quality entertainment and innovative programs and services. We also provide critical support to those who need us most, including forward-deployed troops, military families, wounded warriors and families of the fallen. The USO is a private, non-profit organization, not a government agency. Our programs and services are made possible by the American people, support of our corporate partners and the dedication of our volunteers and staff.