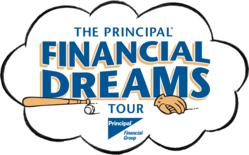 “Over the past decade, The Principal really has become a great supporter of the minor leagues,” said Ben Kratz, director of special events for the Omaha Storm Chasers

Over the past 10 years, The Principal® has brought more than 400 events to minor league ballparks, attracting nearly two million fans. Past tours have given fans the chance to meet some of baseball’s biggest stars, including Steve Garvey, Dave Stewart, Rollie Fingers and Lee Smith, among others.

This year’s tour will make 20 stops from coast to coast, giving fans the chance to meet more legendary players, as well as take home autographs and limited-edition giveaways. The Financial Dreams Tour, which is an evolution of the popular Principal Financial Group Family Fun Fest, also provides attendees with information to help them plan for a brighter financial future.

“The past 10 years have been a real home run for the fans,” said Mary O’Keefe, senior vice president and chief marketing officer, The Principal. “They get to enjoy America’s favorite pastime and learn about reaching their financial dreams.”

One way fans can learn about reaching their financial dreams is through the Four Bases of Financial Security, which are featured in a series of interactive videos played during the game. Fans also can take home a special card that explains the four bases in more detail.

“Over the past decade, The Principal really has become a great supporter of the minor leagues,” said Ben Kratz, director of special events for the Omaha Storm Chasers. “The teams are looking forward to hosting the Principal Financial Dreams Tour again this year because it really adds to the fan experience. The Principal brings exciting new experiences to our fans every year, and we can’t wait to see what they have in store for us this summer.”