As Liberty University continues to take leaps forward, the university is upgrading its current brand, with a more modern look. The updates include a bolder enhancement to the Flames eagle logo, a new monogram, and refinements to the university wordmarks. 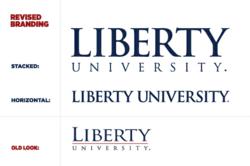 In only a few decades Liberty University has grown from just a vision to the world’s largest Christian university and America’s largest private, nonprofit four-year college. As Liberty continues to take leaps forward — upgrading its academic and athletic facilities in a major campus transformation, increasing its academic excellence, and continuing to bring in prominent figures from every sphere of society — the university is refining its current brand.

“We have already established brand equity in our current wordmarks, athletic logos, and other visual branding elements,” said Chancellor and President Jerry Falwell, Jr. “We believe that now is the time to make certain updates to our branding elements — prior to the anticipated advancement of Liberty’s athletic program to the highest levels of NCAA competition over the next few years. We are implementing a more modern, refined, and refreshed appearance without straying too far from Liberty’s classic look.”

The updates include a bolder enhancement to the Flames eagle logo, a new monogram, and refinements to the university wordmarks. It also includes a new logo for the Liberty Flames Sports Network, which is set to launch in September.

In the past, Liberty has discouraged the use of “LU” for the sake of building name recognition and because other universities could claim the same initials.

“We opted to emphasize our name over our monogram. Now, in light of our explosive growth and expanding national prominence, we feel it is time to adopt the custom of other major universities in allowing our initials to speak for themselves,” Falwell said. “As we continue to set the bar and lead the way in many athletic and academic endeavors, we are confident that this step will ultimately result in greater brand recognition; when people hear of LU they will think of Liberty University.”

Liberty understands how critical a company’s brand is to its recognition. By effectively utilizing taglines and logos, the university connects its rich history to its recent achievements, knowing that even its branding elements can help tell Liberty’s story.

Falwell said the enhanced brand is “designed to integrate the strength of Liberty’s past with its future” and is grateful for the significant role faculty, staff, alumni, and supporters play in helping to fulfill the mission of Training Champions for Christ.