March 10 concert will be third benefit for victims of Japan’s 2011 tsunami disaster supported by the Occidental College Music Department. 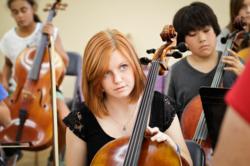 Students will be taught the traditional Japanese folk song, "Sakura," as a tribute to children still suffering from the 2011 tsunami.

Many people in the Tohoku region of northwest Japan are still living in temporary housing. Hiromi Koyanagi, the Japanese teacher at Pasadena Waldorf School, and Dr. Yuri Inoo, the school's wind instrument teacher, have been collaborating to teach the song "Sakura" to the participating children as a tribute to those children still suffering from the disaster.

Pasadena Waldorf School, founded in 1979, is one of over 1,000 Waldorf schools worldwide with over 90 years of experience offering inspired education. Pasadena Waldorf High School, which opened this year, joins 40 other Waldorf high schools now operating in North America. Waldorf education is the fastest growing independent school movement in the world.