Hyundai Motor Company Australia again achieved a record month of sales with a ‘Best Ever’ February total of 7,505 units, equating to an overall ranking of fifth in Australia for the month and a market share of 8.3%. 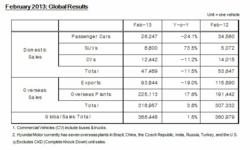 In terms of passenger car sales, Hyundai finished in third position with 4,918 vehicles sold and an 11.3% market share.

February saw five models in the Hyundai range achieve top three placings - the Veloster, ix35, iLoad, and iMax finished second, and the i30 ranked third in each of their respective categories.

Overseas, Hyundai Motor America announced a continuation of their energetic start to 2013, led by Santa Fe and the award-winning Elantra, recording an all-time February record sales result of 52,311 units, up +2% year-on-year.