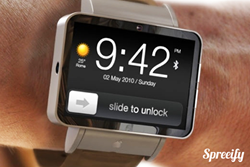 “We are beside ourselves with excitement to be the first company to offer an official Apple iWatch giveaway,” states Spreeify CEO, Ruben Dua.

Spreeify today announces the first ever official Apple iWatch giveaway. Ten winners will be announced prior to October 23 in conjunction with Apple’s official announcement of its newest revolutionary product. Only one thousand people will be able to enter this giveaway before its expiration. Campaign details available at spreeify.com/iwatch

According to various inside sources, Apple has been secretly developing their newest device under strict confidentiality. Reportedly, an elite team of one hundred engineers, product developers, patent attorneys and marketers have been working in a clandestine facility in a top secret part of Apple headquarters in Cupertino.

In response to cynicism about Apple’s ability to succeed in the wristwatch industry, Apple CEO Tim Cook stated, “The only thing we will never do is make a crappy product. That's the only religion that we have. We must do something bold, something ambitious, something great for the customers, and we sweat all of the details."

“We are beside ourselves with excitement to be the first company to offer an official Apple iWatch giveaway,” states Spreeify CEO, Ruben Dua. “We’re set to be among the first batch of people to be able to purchase a few -- and all we can think of is which of our site's members will win them."

About Apple
Apple designs Macs, the best personal computers in the world, along with OS X, iLife, iWork and professional software. Apple leads the digital music revolution with its iPods and iTunes online store. Apple has reinvented the mobile phone with its revolutionary iPhone and App Store, and is defining the future of mobile media and computing devices with iPad.

About Spreeify
Spreeify offers one of the newest and most engaging social shopping sites that offers product giveways and hand-curated delectables. Shop Freely™.