Announcing "The Gay President: A Novel," the beginning of a series of works in honor of Alan Turing.

America's first gay President is discovered in this new novel available in the Kindle store at Amazon.com. 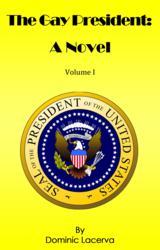 The Gay President: A Novel

In honor of Alan Turing: A British mathematician and the father of modern computer science, Alan Turing was instrumental in breaking the military codes of Nazi Germany, and along with other codebreakers at Bletchley Park, helped to bring down the Third Reich. His intuitions of algorithms and mathematical probabilities saved countless lives, and he is one of the (many) unsung heroes of the Second World War. He was discovered to be in a homosexual relationship in the early 1950's in Great Britain, and was chemically castrated as a result. "The Gay President: A Novel" is in tribute to Alan Turing and his family, and for homosexuals and lesbians everywhere who have been silent victims of disdain and misunderstanding. In the final irony of Alan Turing's life, he gave his loyalty to his country and helped to destroy a regime that exterminated homosexuals, only to be destroyed because of his sexual orientation by the same government to whom he had sworn his allegiance. The following is a brief synopsis of the book:

About the author: Dominic Lacerva served for many years in the hospitality industry, including restaurants and hotels. He taught high school and served in ministry before beginning to put some thoughts on paper and develop an idea for a series of novels based on an heroic gay image. "The Gay President: A Novel" presents a gay president, warts and all, and is the beginning installment of a journey not only of the title character, but of the American experience as well. The author lives near Orlando, Florida.